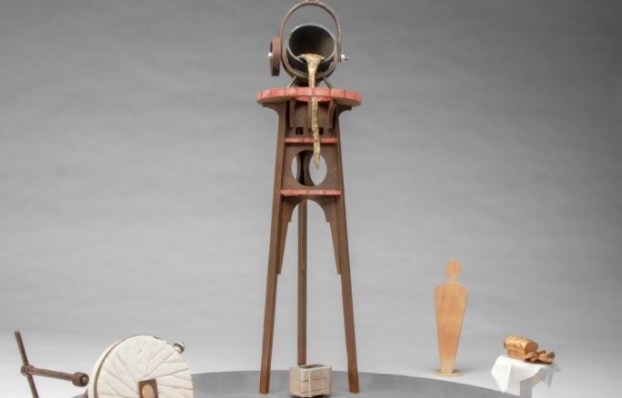 The proposed sculpture by Ted Metz is inspired by Shelby county’s agricultural history, industrial history and the arts—all of which bind us together, creating our current culture. For full image see bottom of story. (Contributed)

Nationally-known sculptors Ted Metz and Nelson Grice have been commissioned to create unique sculptural concepts that have to do with the history of Columbiana and Shelby County incorporated into their works. 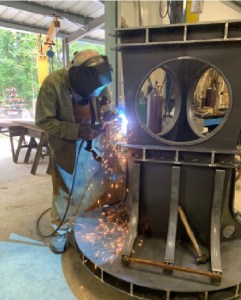 Sculptor Ted Metz works on his design “Sustenance: Agriculture, Art, Industry,” which is one of two sculptures to be installed at the new Old Mill Square Park in Columbiana. (Contributed)

Both artists were charged with including one of the two 1500-pound millstones that were unearthed on the Old Mill Square property while preparing for the foundation of the new Shelby County Arts Center and the new Old Mill Square Park. These millstones are of historical significance as they were used on the property at the turn of the 20th century.

Ted Metz’s bronze and steel sculpture will be installed first near the entrance of the SCAC “Grande Hall.” The title of Ted’s sculpture is “Sustenance: Agriculture, Art, Industry.” Elements of the sculpture that relate to the historical narrative include Bricks from the historic Shelby Iron Works Park and, of course, the millstone found on the Old Mill Square property.

Ted is well-known as a recently retired professor of art at the University of Montevallo—with that said, his work has been exhibited widely including The National Gallery Smithsonian Institution in Washington, D.C., Venice and Cortona, Italy. Ted’s sculpture at Old Mill Square will be his sixth large scale public sculpture and reach a height of 26 feet. The bronze casting and steel fabrication was executed at his home studio in Montevallo.

A second sculpture also incorporating a millstone found on the property will be completed later on in the year by sculptor Nelson Grice. The creation of the sculpture is already well underway. Nelson’s sculpture is being cast in the Metal Arts Foundry in the new Shelby County Arts Center. Grice’s sculpture pays tribute to Columbiana being the county “seat” and includes a relief of the original 1854 courthouse in Columbiana. The old 1854 courthouse is the home of the Shelby County Museum and Archives.

Jennifer Maier, executive director of the Shelby County Museum and Archives and the Shelby Iron Works Park, is pleased to see both sculptors incorporating local history in their work.

“Both Ted Metz and Nelson Grice have done a wonderful job of paying tribute to Shelby County and its rich history,” she said. “Ted’s sculpture mixes agriculture and industry with the arts. Agriculture and industry are the bedrock of Shelby County. And art is so fundamentally important to every community. It is amazing to see how well Ted has combined those three elements.”

Nelson’s sculpture is being cast onsite at the Metal Arts Foundry at the new Shelby County Arts Center and will feature a relief of the old 1854 courthouse, which is one of the most widely-recognized buildings in Shelby County.”

Installation of Ted Metz’s sculpture is scheduled to begin the week of Aug. 24, 2020. 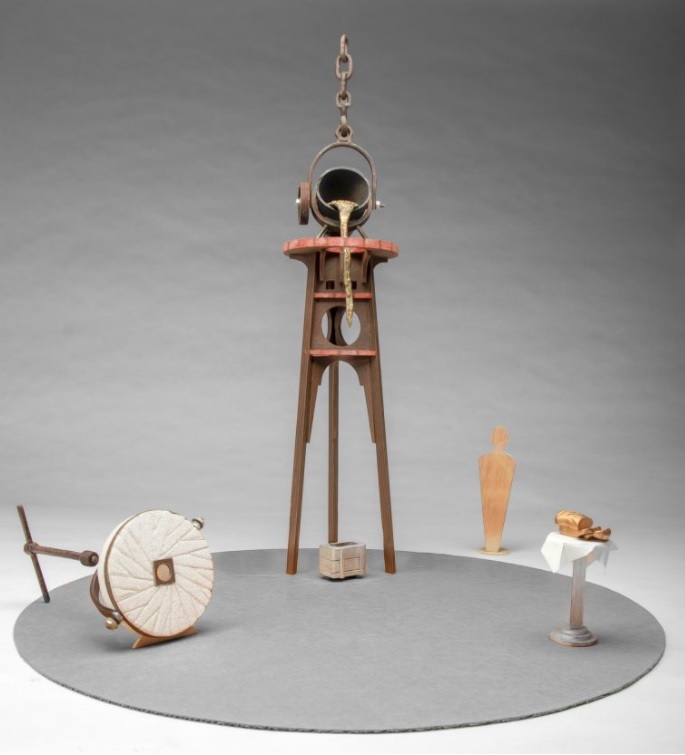 The proposed sculpture by Ted Metz is inspired by Shelby county’s agricultural history, industrial history and the arts—all of which bind us together, creating our current culture. (Contributed)