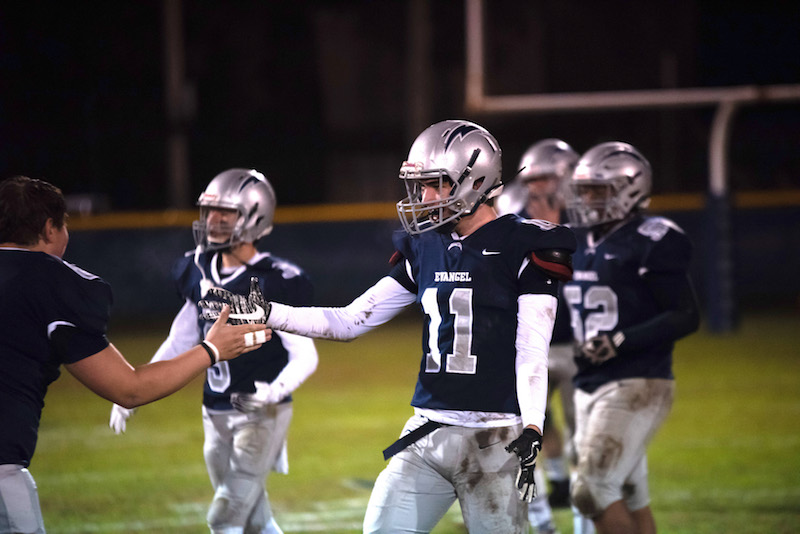 The Evangel Lightning opened the 2020 football season with a dominant showing against Meadowview in a 40-6 game that was called at the half due to lightning. (File)

SELMA – With the lingering pandemic and threat of rain, Evangel Christian School was unsure how much football it would get to play Friday night. The storm held off for two quarters, enough time for the Evangel Lightning to strike a 40-6 win at Meadowview Christian School before the game was called at halftime.

“It was emotional for me. All that we’ve been through with the COVID stuff. I was so thankful that God allowed us to play. If we don’t play another game, I’m glad we got to play one. It was good to get back to a little bit of normalcy,” said Tim Smith, entering his fourth year as ECS head coach. “I was really proud of them tonight. It was a good night for us. It was a good win … We just hope we get to keep playing each week.”

Meadowview returned the opening kickoff for a touchdown, but Jett Lodge sacked the MCS quarterback on the two-point try to keep it a 6-0 game. Lodge then went to work on offense, catching a 36-yard touchdown pass from Eli Whitfield to even the score. Placekicker Lucas Mast made his first extra point of the night to give Evangel the lead, 7-6.

Whitfield, who threw for 186 yards on 6-of-7 passing and four TDs, added a 75-yard touchdown run in the second quarter. Tyler Wilson had a 9-yard touchdown carry.

Mast finished the night 4-of-6 on point after TD kicks.

With more than half of last year’s starters graduating, Smith said he was pleased to see two freshmen and three sophomores step into starting roles in the opener.

Evangel is scheduled to return to action Friday, Aug. 28 at 7 p.m. to host East Central Homeschool for its only home game until October. Evangel is asking everyone to wear a mask and to honor the school’s COVID policies at next week’s game.

Demopolis scores 14-unanswered in the fourth quarter to down…