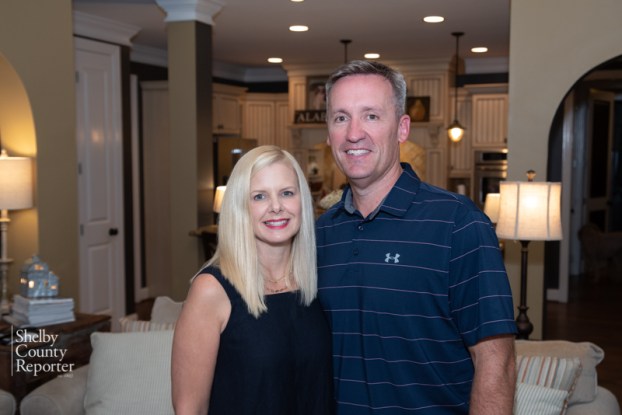 Scott Brakefield with his wife Michelle at his house after winning the mayoral race for Alabaster. (Reporter photo/Keith McCoy)

“I am just overwhelmed with excitement,” Brakefield said. “I am humbled by the support of our community. I am looking forward to continuing the progress that we have started and keep moving alabaster forward.”

Brakefield has served as the Ward 6 council member for the past three terms, where he he had a hand in creating the Alabaster City Schools.

“We have a lot of big projects that need to be completed. We have parks projects that I want to see to the end. We are also in the initial phases of the expansion of Highway 119, which is a critical project for our community,” Brakefield said.  “We want to make sure that gets expedited. We want to continue to move Alabaster in the direction we are now. We are just super excited.”

Other notable elections in the city that were contested included Wards 3, 4, 5 and 6.

In Ward 5 there will be a runoff election as no candidate received more than 50 percent of the vote. The runoff will be between Jamie Cole who won 310 votes, and Mike Mehlhoff who won 228 votes.

Ward 6 was vacated by Brakefield when he announced his intention to run for mayor. The seat was won by Seth Gandy who defeated Larry Sailes 544-321.

In addition to those election results, Sophie Martin retained her seat in Ward 1, while Rick Ellis will remain in the Ward 2 seat and Kerri Pate in the Ward 7 seat.