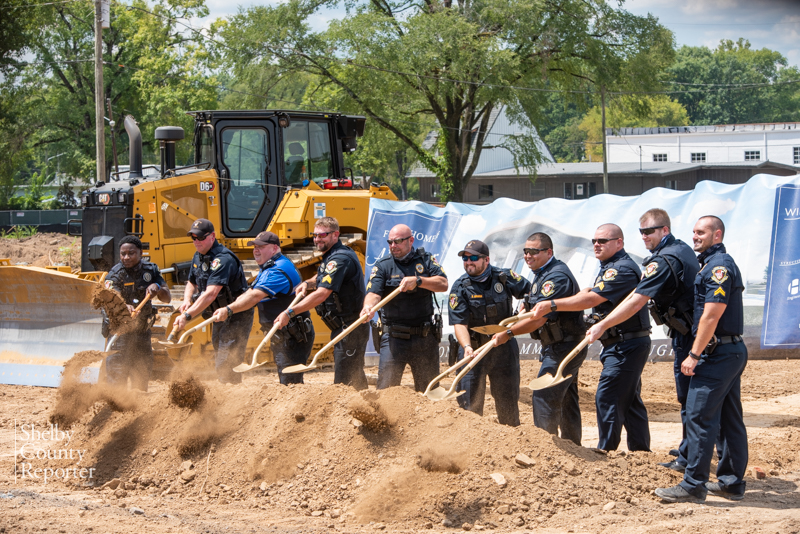 Alabaster police officers help break ground on the city’s new police station, which is expected to be complete at some point in 2021. (Reporter photo/Keith McCoy)

ALABASTER – The city of Alabaster held a groundbreaking for its new police station, something that has been in the works for a while, on Wednesday, Aug. 19.

The new police station is expected to be completed sometime next year and is located at 10489 Highway 119 in front of Alabaster City Hall.

According to City Administrator Brian Binzer “to better serve the community and keep our residents safe, the state-of-the-art police station includes all the necessary resources to assist our law enforcement officers. It also serves as a monumental gateway entry into our city center and includes an open and hospitable lobby for our residents and the public.”

The current station used by Alabaster police located at 201 1st Street North, was built in the 1950s when the city’s population was much smaller.

“This is a huge project we have been planning since I came into office,” said Alabaster Mayor Marty Handlon. “All of the upgrades put into this building will be a boost. Those added little things let the officers know how much we value them. Public Safety and Alabaster means a lot to what safety is in the city.”

The new police station’s location was chosen partly out of the city’s comprehensive plan passed back in 2016 to revitalize the Siluria area of the city.

After acquiring properties in the area, the city was finally able to move forward with clearing the land and preparing it for construction in the past year.

“We are very excited about the new police station and the impact it is going to have on our city,” said Curtis Rigney, Alabaster Police Chief. “I am very proud of the fact that the facility was planned for long-term future growth, so as the city grows, the facility will be ready to accommodate that growth.”

Original plans for the New police station included relocating municipal court, court clerks and magistrates to the building, but it was determined that was unnecessary. The new building will primarily be a resource for the cities police officers.

One of the biggest advantages the new police station offers is the ability to boost morale and allow for a more effective location for police officers in Shelby County‘s largest city to conduct their operations.

“It is significant for us in Alabaster, and because we are the largest city it will also positively affect Shelby County,” Rigney said. “We are very grateful for the mayor, the council and the citizens. They will get a lot out of this and it will benefit them greatly.”