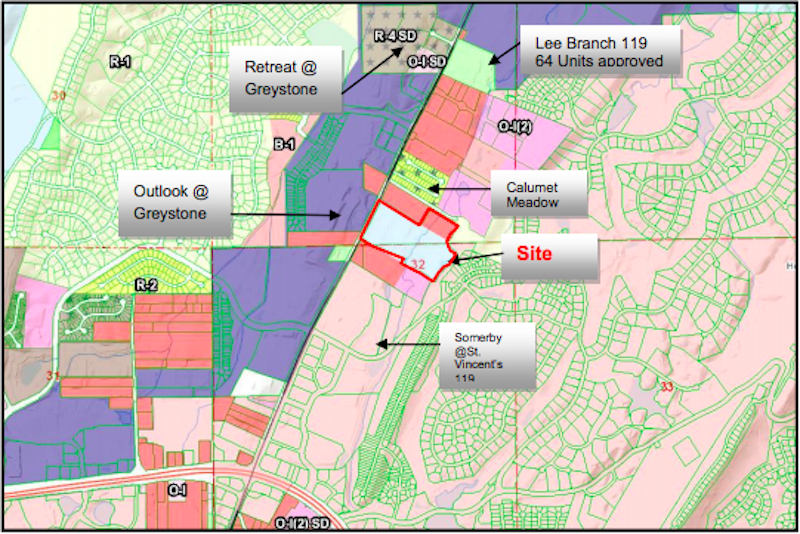 PELHAM – The Shelby County Planning Commission voted on Aug. 17 to table a district rezoning request for a proposed cottage rental home development on Alabama 119 roughly a mile northeast of U.S. 280.

The request from Capstone Collegiate Communities, made on behalf of the property owner, was for a change in zone district boundaries for the 29.90-acre property from Holding Zone District (H-Z) and General Business District (B-2) to Multiple Dwelling Special District (R-5 SD).

The proposed development would be a private gated community consisting of 187 residential units and associated amenities, including a clubhouse, pool and pool house.

Access for the property would be one main entrance, with turn lanes on Alabama 119, aligned with the Outlook at Greystone apartment complex across the road.

The Planning Commission’s decision to table the request came after members reviewed preliminary plans for the development, heard from project representatives and received comments from the public during and prior to the meeting.

Kristine Goddard, principal planner with Shelby County, said the county received more than 60 written comments in opposition to the request following the advertisement and notification of the proposed development.

“I did also receive three emails of support for the development, but I would like to stress that because of the situation that we experience right now with the social distancing and COVID, staff did strongly recommend that any comments be submitted in writing,” Goddard said. “In addition to the submitted material that has not been reviewed fully by staff including the revised access layout, the traffic study, and preliminary grading and storm water plans, the high density of the project as stated in the staff report has also received a recommendation of denial by the county engineer.”

Jim Beatty, vice president of development for Capstone Collegiate Communities, said a national trend is happening toward rental housing such as the one-, two- and three-bedroom homes and townhomes featured in the proposed development plans for 119.

Beatty said the project plans also call for leaving about 925 feet of open space behind the development.

In other business, the Planning Commission:

•Approved a request from David Brady with LME properties to change the amended master plan for the Narrows, Commercial Sector 1 to re-subdivide Lot 4A into three commercial lots. The property is unzoned and located in North Shelby off U.S. 280.

•Approved a request from Chris Ronk with Piedmont International University, property owner, for a Special District Amendment to modify the exclusive ownership and operation from Southeastern Bible College to an indeterminate tenant or property owner to allow the current permitted uses on the site to continue as an educational and training institution with dormitories utilizing the existing and planned facilities as approved by the Special District Plan. The property is located on Valleydale Road in North Shelby.