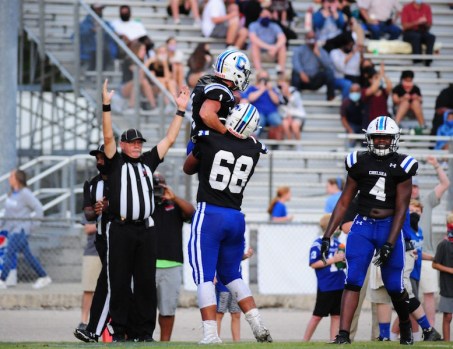 Collier Blair is lifted in the air after one of his two touchdowns. He totale d153 yards and two touchdowns, including the game-winner, to lead the Hornets to a 27-23 victory against Helena. (For the Reporter/Jeremy Raines) 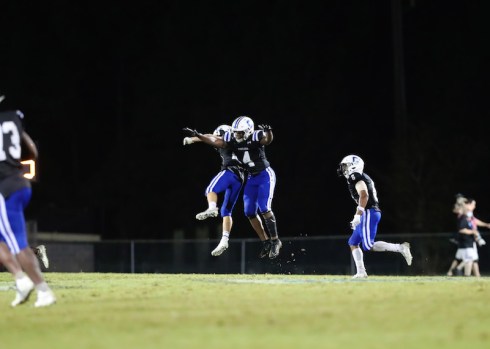 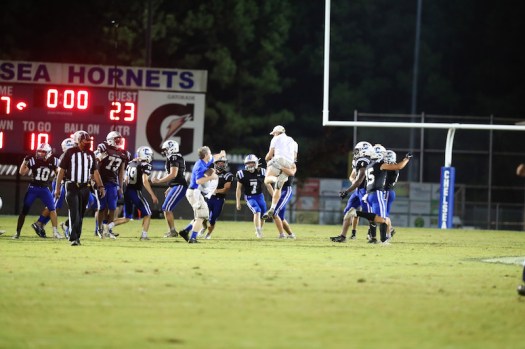 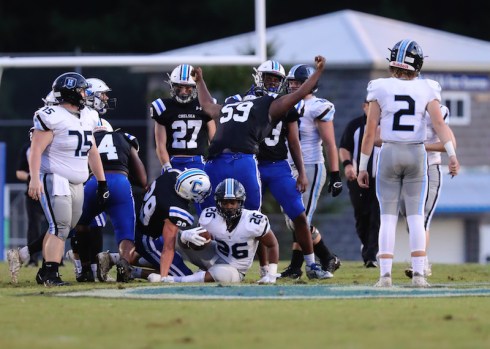 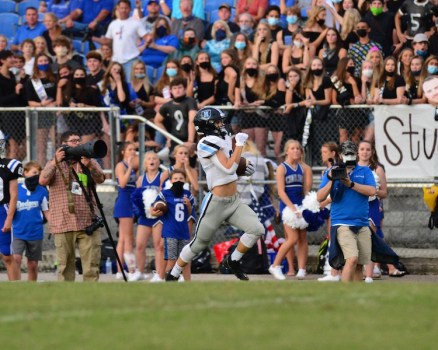 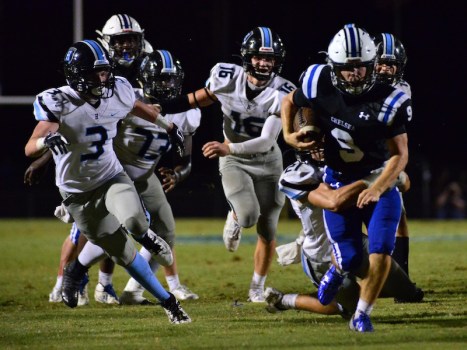 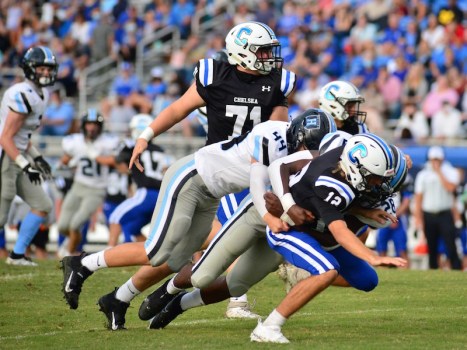 CHELSEA – From the opening kickoff to the final whistle, Helena and Chelsea provided one of the most entertaining 6A games to start the young season as the Hornets narrowly topped Helena 27-23 on Friday, Aug. 28.

A wild fourth quarter that saw a couple lead changes, a goal-line stop by Chelsea, a safety forced by the Helena defense and the winning Chelsea touchdown with 46 seconds to play summed up just how crazy this county matchup got in the final 12 minutes.

“The last drive of the game the offense and our kids kept fighting,” Chelsea head coach Dustin Goodwin said. “We’ve got some guys playing both ways and we carried out our assignments well. Collier put the team on his back, along with the guys up front and sealed the deal for us.”

Chelsea senior running back Collier Blair led the way for the Hornets rushing for 153 yards and two touchdowns. The latter touchdown being the eventual game-winner.

The Huskies started the game as well as a team could as Kaysn Bustamento returned the opening kickoff for a touchdown to give Helena a 7-0 lead 13 seconds into the game.

Sixteen of Helena’s 23 points in the game came from special teams as the Huskies struggled to move the ball on offense, especially in the first half.

After the opening touchdown for Helena, Chelsea countered midway through the first quarter as Blair scored his first touchdown of the night with an 8-yard run with 7:57 left in the first quarter. The extra point was wide right as Helena held a 7-6 lead.

From that point forward, Chelsea dominated the first half of play as penalties continually hindered Helena.

Late in the second quarter, the Hornets’ rushing attack continued to keep the Helena defense on its heels as senior Adam Reaves scored his first of two touchdowns on a 10-yard run to give Chelsea its first lead 13-7 with 5:54 to play in the first half.

After several punts on offense, Helena stalled again on offense late in the first half when the Huskies were called for holding after a big gain on a screen pass to Marquis Johnson.

The Huskies punted the ball back to Chelsea and three big penalties set up the third Hornets’ touchdown.

With 33 seconds to play in the first half, Helena was called for defensive pass interference and two dead ball fouls to set Chelsea up at the Helena 33-yard line.

On the next play, Chelsea quarterback Nic Neaves lofted a 33-yard touchdown pass to Reaves to give the Hornets a 20-7 halftime lead.

Trailing by six early in the fourth quarter, Helena got a big stop on defense as they held Chelsea to an incompletion on fourth-and-18 at the Huskies’ 25-yard line.

From there, Helena’s offense finally started to come alive as quarterback Mac Turner completed several big passes to wide receiver JC Sivley. The biggest being a fourth-down completion to Chelsea’s 2-yard line with less than eight minutes to play.

With four tries to get in the end zone from the 2-yard line, Helena failed to score, and Chelsea had a huge goal-line stand to preserve the 20-14 lead with seven minutes to play.

However, after the goal-line stop, Helena’s defense also came up big tackling Chelsea in the end zone for a safety to cut the Hornets’ lead to 20-16.

After the safety, the Huskies’ offense finally put an offensive touchdown on the board as Bustamento scored his second touchdown of the game, scampering down the far sideline 55 yards for a touchdown to give the Huskies a 23-20 lead with 5:51 to go in the game.

From there, Chelsea put together a textbook late-game drive that ate up the game clock and featured plenty of runs by Blair.

Time after time, Chelsea put the ball in the hands of the senior who ripped off several big runs that eventually got the ball to the Helena 9-yard line with less than a minute to play.

Trailing by three, Blair found a crease and blasted his way up the middle en route to a go-ahead and eventual 9-yard game-winning touchdown that put the Hornets up 27-23 with 46 seconds left in the game.

On their final chance, Helena’s Turner threw a ball deep on fourth-and-15 but it was intercepted by Chelsea with 21 seconds to play to seal the win.

Both teams are now 1-1 on the season.