Breaking down the opening week of region play 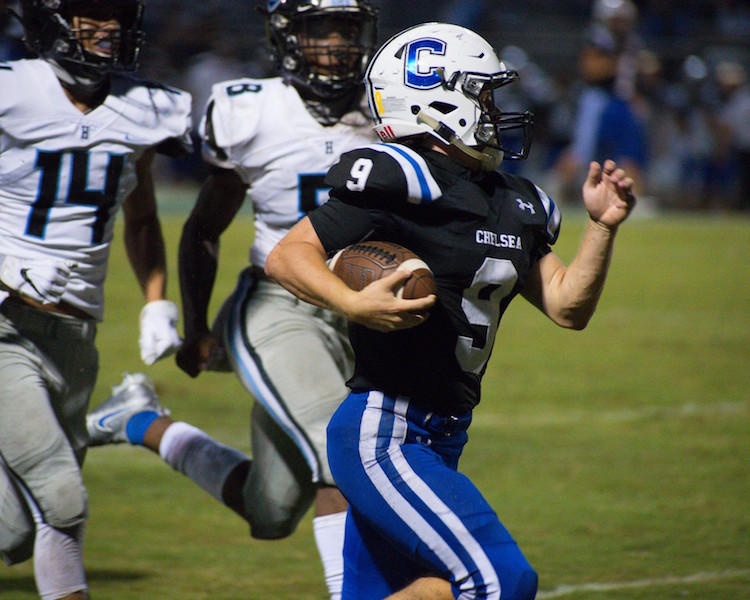 Chelsea will host Briarwood in the region opener for both teams this Friday night. It’s be the Shelby County Reporter’s Game of the Week. (For the Reporter/Jeremy Raines)

Two weeks are behind us and most teams have had at least one game to prepare for what is to come next—region play. This is where playoff hopes begin, as several teams enter with their eyes not only on a playoff spot this year, but a region championship.

Chelsea vs. Briarwood (Game of the Week)

Rivals Chelsea and Briarwood will meet once again in 2020, but this year the rivalry will mean a bit more. Now in the same region, the two will be looking to kick region play off with a win to get a leg up in the chase for a playoff spot. Last year, the Hornets picked up a 17-14 win but later had to forfeit the matchup later in the season due to an ineligible player. This year, Briarwood enters off a difficult 21-14 loss to Spain Park after giving up 21-unanswered points in the second half, while Chelsea gained confidence with a 27-23 win over rival Helena last week. The Lions’ defense, however, is so talented it shut down a very good Jaguars’ offense in the first half last week. This week, if they can hone in on Collier Blair, the Chelsea running back, then the Lions should be able to do enough to come away with a win. But this game got a lot more interesting after the second half of both games last week. Briarwood 21, Chelsea 14

Spain Park has done exactly what it needed to early in the season by starting the year 2-0 with wins against Huntsville and Briarwood. Last week came with a bit more of a challenge, scoring 21-unanswered in the second half to down Briarwood, but they faced adversity and found a way to win—something that should benefit them moving forward. Now, the Jags get a matchup with 2-0 Hewitt-Trussville to kick off region play. Last year, Spain Park won this game 28-24 against a good Hewitt team. This year, you’d expect the No. 2 ranked Huskies to be ready for redemption, but this game has the potential to be decided by who has the ball last. Spain Park 31, Hewitt-Trussville 35

This almost feels like a must-win game for Oak Mountain. With difficult matchups against Vestavia Hills, Hoover, Spain Park, Thompson and Hewitt-Trussville still on the schedule, the Eagles have to start region play 1-0 to not only gain confidence but not fall behind the eight ball if they want to be one of four playoff teams from Class 7A, Region 3. A playoff team would win this game, but both are off to solid 2-0 starts this year. For the Eagles, they’ll have to rely on their experience and a strong defensive start to pick up a win following wins against Chelsea and Pelham to start the season, while the Titans will look to continue a strong offensive start to the season with 34 and 45 points in the first two games. If the Eagles are as good as they hoped coming into the season, they’ll have to start proving it this week. Oak Mountain 28, Gadsden City 24

Thompson will look to continue another strong start in 2020 when the Warriors host Tuscaloosa County on Sept. 4, marking their last home game before playing four of the next six games on the road. It also marks a great opportunity for Thompson to start region play 1-0. The Warriors have put up 63 points in this matchup two of the last three years and have won this matchup a combined 161-40 the last three years. With the way Thompson’s offense is rolling early in the season behind a plethora of talent and the improvement the defense showed from week one to week two in a 35-7 win against Sparkman, Thompson seems to be set for another strong showing in this one. Thompson 42, Tuscaloosa County 14

These two teams kicked the season off the last two years, but will now have some experience under their belts playing each other in week three this year. That will benefit Calera more this season, but ultimately, Pelham has more experience overall going into the matchup. This matchup marked Calera’s only win last year, so the Panthers will be out for redemption, and they’ve looked good enough the first two weeks on both sides of the ball to give you confidence their ability. If Dylan Peterson and Gabe Gamble continue on their current course, the offense will be fine. Add in any improvement throwing the ball, and Pelham becomes a scary offense. The Eagles, while coming off a 31-14 loss to No. 1 Mountain Brook, are technically 1-1 on the season after Jackson-Olin forfeited their originally scheduled game last week. The Eagles now have a tight 14-12 loss to a good Demopolis team and the loss to the Spartans, but showed fight in that game after falling behind 31-0. It should be another compelling matchup, but the Panthers should have a slight edge in experience. Calera 14, Pelham 24

Both teams should have confidence coming into this matchup, and it marks an exciting way for the Huskies to kick off region play. Last year, they were the favorites to claim the region championship because of what was known about the other teams, but this year, there is a lot of unknown about how good teams will be and Wetumpka is one of those wildcard teams that made the second round of the playoffs last year with a 6-6 overall record and could be a playoff team again this year. If Helena does what it knows how to do—run the ball and play defense—then the Huskies will walk away with a physical win. Helena 28, Wetumpka 24

As Shelby County looks to end a lengthy playoff drought dating back to 2009, this game marks the perfect opportunity for the Wildcats to open region play with a win. Sipsey Valley is coming off a 4-6 season last year in Class 4A, and now being in 5A, will have to take on a talented and experienced Shelby County team. Sipsey is also 0-2 on the season with losses of 45-6 and 52-7. The Wildcats opened their season last week with a 20-18 victory against Montevallo thanks to a strong defensive stand late. With the defense showing signs of improvement, they should also see the offense come ready to play in this one. Shelby County 35, Sipsey Valley 17

An inexperienced Montevallo team gets the misfortune of taking on the No. 1 4A team to kick off region play this week and then gets No. 2 Bibb County a week later. American Christian will have one of the best offenses in the state back this year and should score plenty in this game. But, Montevallo put together a surprising performance during its opener against Shelby County. The Bulldogs fell behind 14-0, but responded with 18-unanswered points to take the lead. While they lost, it was a strong showing in Blake Boren’s first game as head coach with only a handful of players back with experience this year. The key for the Bulldogs will be to have their young offense make some plays to keep up and gain confidence. If they can find something that works, it may not lead to a win in this one, but could lead to confidence throughout the remainder of region play. Montevallo 21, American Christian 49

Cornerstone is off to a 0-2 start on the season with a 28-12 loss to Southern Prep and a 46-6 loss to Banks. Now, the Chargers will look to pick up their first win against 0-1 Lakeside this week. Cornerstone is 1-5 all-time against Lakeside and hasn’t shown much offensively early this year. It should be another game they theoretically should have a chance in, but they’ll have to prove they’ve taken a turn for the better. Cornerstone 14, Lakeside 27