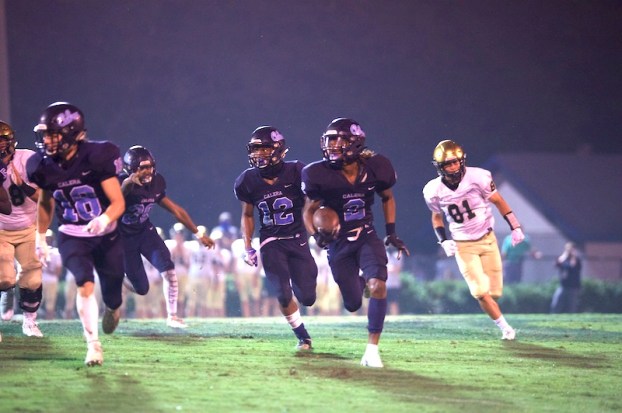 Calera dropped a 31-14 game against Mountain Brook on Saturday night, but the Eagles scored 14-unanswered points in the second half and showed promise. (For the Reporter/Larry Dancy)

CALERA – Calera and Mountain Brook weren’t expecting to play Saturday night, Aug. 29, football this week. They weren’t even expecting to play each other, but after Calera’s original game against Jackson-Olin was canceled Friday due to Covid-19, that is exactly what happened.

With both having already picked up a win due to their original opponents forfeiting their Friday night matchups, the game didn’t matter in the win-loss column, and despite a 31-14 loss for the Eagles, there was plenty for them to take away from a matchup with the No. 1 Spartans.

“I tip my cap to Mountain Brook for making this game happen,” Calera head coach Trey Simpson said. “We want to play every Friday night and with the uncertainty of everything, Every Friday is in jeopardy somewhat. We’re going to do whatever we can to make sure these guys have a season as long as we are keeping everybody safe and doing everything the right way. I’m just thankful for our administration, our city, Mountain Brook and everybody for making it happen.”

Once play on the field began, Mountain Brook received the opening kickoff and started what was an impressive first half from the Class 6A No. 1 team.

Heath Griffin took the ball up the gut for a 5-yard touchdown to give the Spartans a seven-point lead early in the game. Calera responded with their longest drive of the first half when Tyler Nelson was able to scramble for big yardage for the Eagles, but the drive eventually stalled on the Spartans’ 25-yard line.

Mountain Brook’s first offensive play on the ensuing drive was a microcosm of the first half—a 75-yard touchdown pass to Simmons Brown for a 14-0 lead.

Calera once again was stopped on third down on the ensuing drive, and the Spartans took over at their own 30-yard line. Reed Harradine scrambled for a first down before another long pass, this time to Matt Holloway, put Mountain Brook in the red zone. Calera’s defense, however, held firm to limit the Spartans to a field goal to make the score 17-0.

Mountain Brook’s defense, however, continued its dominant start and was able to force three more straight three-and-outs from Calera. Each of those drives from the Eagles lasted less than a minute of game time.

In addition to that, the Spartans were able to use their no huddle offense efficiently to tire out the Eagles’ defense and score two more touchdowns before the end of the half.

Down 31-0 entering the second half, the Eagles needed a spark, and they got it early in the third quarter when Tyler Nelson dropped back to pass and found Kobe Prentice open in the slot. After making one defender miss, Prentice found his way up the sideline for a 65-yard touchdown to put the Eagles on the board. Preston Stokes nailed the extra point to cut the deficit to 24 points.

Mountain Brook attempted to answer, but Calera’s defense stepped up with a big play.

At the end of a grinding run up the middle, the ball was popped straight into the hands of Derrick Edwards Jr. The senior safety had blockers and was able to return the fumble down to the Spartan 2-yard line before stepping out of bounds. Two plays later, Chris Cotton punched it in to make the score 31-14.

“We have some great kids that have worked extremely hard to turn this thing around,” Simpson said. “They’re not going to back down. We learned from it and it made us better.”

Despite Calera’s dominating time of possession and field position in the second half, they couldn’t replicate another scoring drive and fell 31-14.

The Eagles are now 1-1 with Saturday’s game not counting as a loss and will now get set to host Pelham to open region play on Sept. 4.

By ANDREW SIMONSON | Special to the Reporter COLUMBIANA – In a night of remembrance for Shelby County’s seniors, it... read more