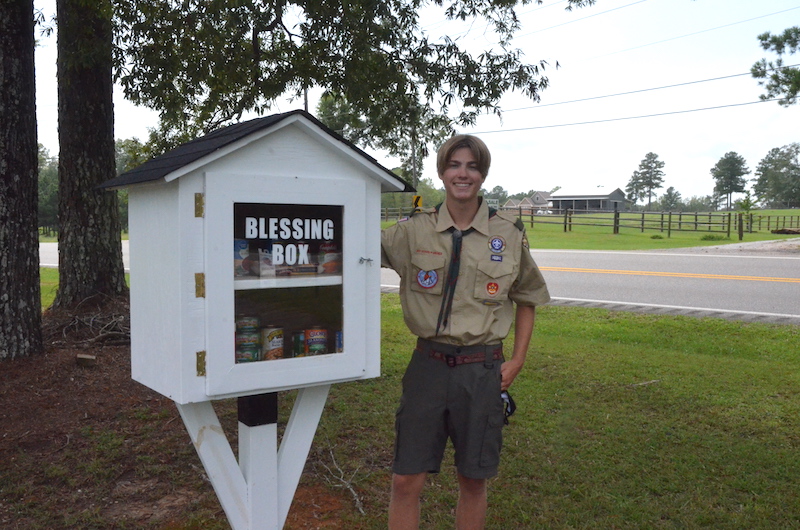 Seventeen-year-old Cade Bailey, a senior at Chelsea High School, stands next to the Blessing Box he built and installed at Lesters Chapel United Methodist Church to serve as a resource for anyone in the community who needs food. (Reporter Photo/Emily Sparacino)

COLUMBIANA – When Chelsea High School senior Cade Bailey was thinking about what to do for his Eagle Scout project this year, he remembered a local program’s mission to provide food for children and their families during difficult times.

“Whenever I was in middle school, I was a Peer Helper, and we worked with Backpack Buddies,” Bailey said. “I didn’t realize how many kids in the area were struggling with food insecurities. It stuck with me until high school, and I realized I need to do something about this.”

Bailey, 17, decided to construct a wooden box to be stocked with canned food items free and available to anyone in need.

The box, called a “Blessing Box,” is located on the grounds of Lesters Chapel United Methodist Church in Columbiana.

Bailey said he chose Lesters Chapel as the site for the box because he thought it would complement the church’s monthly Community Food Table ministry.

“I love this natural outgrowth from the food table and having something available 24-7 for people that are hungry,” said the Rev. Deb Epley, senior pastor at Lesters Chapel. “It’s really important to take care of that need.”

Epley described Bailey as an “impressive young man” and commended him for his meticulous research and presentation of his project plans to church leaders at Lesters Chapel.

Bailey used some of his own money, plus donations from family and friends, to fund the project.

His materials included thick plywood for the box, which is affixed to a 4-by-4-inch post driven 2 feet into the ground.

The front window is an acrylic glass panel bearing a decal Bailey’s sister helped him complete.

Two of Bailey’s friends who are woodworkers also helped him construct the box.

“It’s really sturdy,” he said of the box, which was installed in late July. “This was my first time planning and putting it together. It was all a learning experience for me. It came out pretty well, and I’m pretty proud of it.”

Bailey has been involved with the Scouts since the second grade and is aiming to complete the remaining requirements to achieve the rank of Eagle Scout by the end of the year.

The Blessing Box is located under a tree at the edge of the church’s parking lot, near the playground, and is accessible 24 hours a day, seven days a week.

Anyone who would like to donate canned food items to the Blessing Box may drop off donation bags outside of the church’s educational building.

“My church is proud of the project,” Epley said. “They’re excited about it and the outgrowth it’s doing for our food table. I believe the Blessing Box will be an asset to our community.”