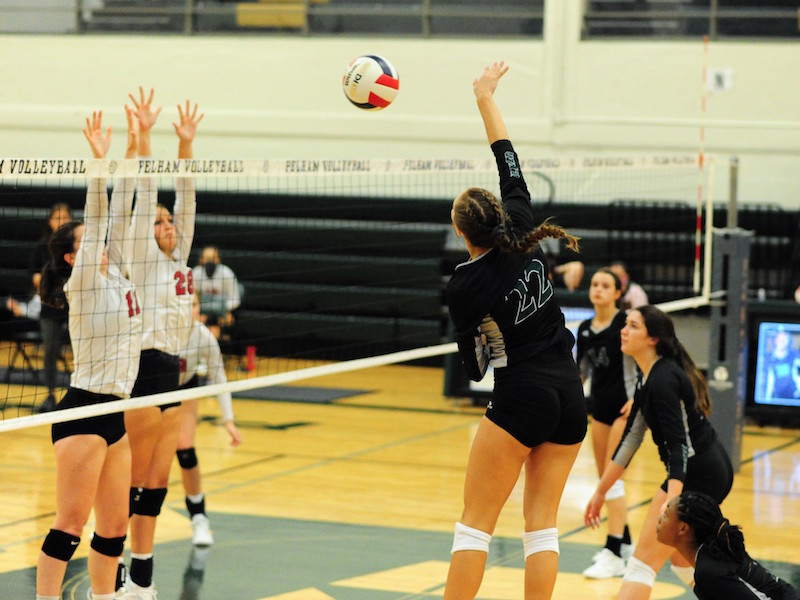 The Pelham Panthers opened area play with a dominant sweep of Chilton County on Tuesday, Sept. 1. (For the Reporter/Jeremy Raines)

CLANTON – After losing four of their last five matches, the Pelham Panthers responded in a big way on Tuesday night, Sept. 1, when they traveled to Clanton to take on Chilton County in the opener to area play.

The Panthers overcame four losses in the always difficult Mayor’s Cup tournament over the weekend and bounced back to not only pick up a 3-0 sweep of the Tigers to start area play with a win, but won each set by at least eight points.

Following a 6-2 start to the season, it looked like the Panthers were ready for another strong run this season after an Elite-Eight appearance last season despite losing the majority of last year’s starting lineup.

But the four losses in their next five games between Aug. 28 and 29 forced this year’s starters to face adversity early in the season.

But the Panthers didn’t let that deter them from their goal of winning an area title this year and making another strong playoff run, which has become the expectation every year at Pelham.

Against Chilton County, the Panthers put that into perspective and took care of business to take one step toward their goal.

In the opening set against the Tigers, Pelham came out and took out all of the frustrations from the weekend with a dominant showing from start to finish.

The Panthers pulled in front early and led throughout before pulling away for their largest set win of the night by 13 points (25-12).

Chilton showed a bit more fight in the second set, but the Panthers had gained the confidence they needed in the opening set and used that to fuel another strong finish for a 25-16 win and a 2-0 lead in the match.

Up 2-0 with all of the momentum in the match on their side, the Panthers came back and closed the match out in the third set. Like the two before, Pelham controlled from the start and despite a push from the Tigers, the Panthers pulled away late for a 25-17 victory.

Out of the team’s eight wins this season, now at 8-6 overall, six of the Pelham’s wins have now come in straight sets. It marked the first, however, that wasn’t part of a tournament or tri-match, meaning it also meant the Panthers’ first sweep in a best-of-five match this season.