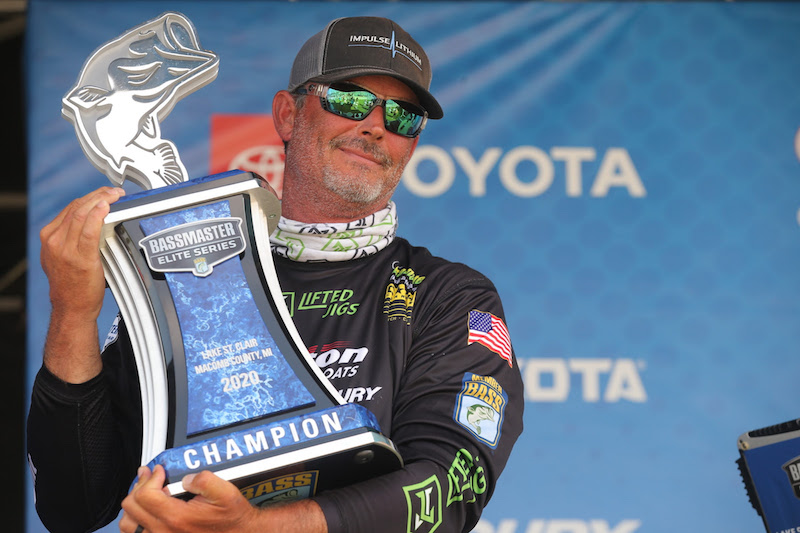 Helena’s Bill Weidler recently won the YETI Bassmaster Elite at Lake St. Claire thanks to reeling in a combined 86 pounds, 7 ounces during the four-day tournament. (Contributed)

HELENA – Bill Weidler, a Helena resident, won the YETI Bassmaster Elite at Lake St. Claire on Sunday, Aug. 23 with his earnings totaling around $100,500 at the tournament, with his overall winnings totaling $204,350.

Weidler competed in the four-day competition and ended up winning after achieving a four-day total of 86 pounds, 7 ounces. Previously Weidler’s highest finish was in sixth place.

“It’s almost surreal if you look at the history of the elites there’s guys fishing in the series for many years without winning,” Weidler said. “To get the opportunity to fish on the final day is a feat in itself. There’s a saying out on the tournament trail: ‘You can’t win it on day one, but you can lose it on day one.’”

Weidler said he found his spot for the week by coincidence.

“I just stumbled across a great area in Anchor Bay, and that was my primary spot,” Weidler said. “I went through it one day in practice; it was cold and I’m an old man so I decided to pull over instead of freezing running down the lake.

“I drifted through an area and caught a limit of 26 pounds in about two hours. I had two 6-pounders, and I was like, ‘I might have found something here.’ That’s where I camped out all week.”

Focusing on a 1,000-yard area of Anchor Bay, Weidler found his bass on the hard edges of grasslines in 14 to 15 feet. Watching his Humminbird 360 for clusters of baitfish helped focus his search.

Weidler caught all of his fish on a drop shot with a Strike King Baby Z-Too in the gray glimmer color. He used a 3/8-ounce weight and a No. 1 Owner drop-shot hook.

Weidler placed 17th on Day 1 with 20-8. Catching the same weight the next day put him in 13th. Day 3 saw him weigh 22-10 and earn his Championship Sunday berth in eighth place, and Sunday’s limit of 22-13 sealed the deal.

After two hours of fruitless effort, Day 4 saw Weidler catch three of his best fish between 9 and 10 a.m. He caught fish throughout the day, but two big afternoon bites — a 4-4 and his second of two 5-plus-pounders — pushed him across the finish line.

Weidler’s interest in competitive fishing dates back to when he was a teenager. He said that he started out fishing in local tournaments but then made the switch to bigger ones.

“I just love the competition. It was something that I enjoyed doing. I love fishing, and adding in the competition factor drove me to do better,” he said. “It was just a hobby that I picked up and I wanted to excel at it.”

Weidler said that he was not expecting to win, but just went into this tournament hoping to at least place in the top 40 where he could make some money and move onto the next one. However, he realized after placing higher on the first two days that he had a shot to win.

Going into the final day he calmed himself by listening to music and getting in touch with God, who he thanks for his success.

“I was listening to a song during the competition called Red Letters by Crowder, and being able to listen to that song really put me at ease and made me feel comfortable,” Weidler said. “Sometimes when you’re down and out you have got to grasp a hold of what you believe in. I gave the Lord the credit for where I am today in my career and my life.”