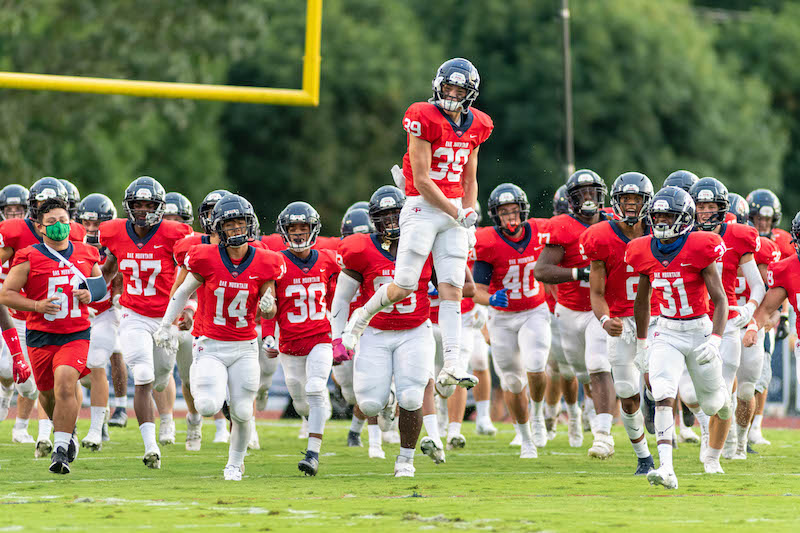 Oak Mountain went on the road and picked up a big region win against Gadsden City on Friday night thanks to strong games from Evan Smith and Judah Tait. (For the Reporter/Neal Wagner)

GADSDEN – A year ago, Oak Mountain took seven weeks to get to three wins. Now, the Eagles are riding an undefeated start that could end in a winning season if the current trend continues after they opened region play with a 38-23 road win against Gadsden City on Friday night, Sept. 4.

“We made progress last year, and I thought we got better every week,” Bell said postgame. “We knew we were going to have playmakers and we knew we would have guys on defense. I mean, good gracious, we got nine guys back.

“I’ve been cautiously optimistic this whole time. But the thing we’ve been challenging our kids is, ‘We can’t get complacent at all.’”

After Oak Mountain put the pressure on the Titans early and forced a fourth-and-goal stop, the Eagles offense got a chance to shine. A 40-yard run by Cade George followed up a 40-yard pass from quarterback Evan Smith to drive down the field in a hurry and give the Eagles a 6-0 lead on a Judah Tait touchdown run.

Gadsden City responded late in the opening quarter with a drie that ended in a 1-yard touchdown to take over the lead.

But Smith had an answer on a 28-yard touchdown pass to Noah Young to put the Eagles back in front 13-7.

The rushing game then got a spotlight on both sides, including a 55-yard TD from Gadsden City’s RaTavious Hicks to close the gap, as that was one of two scoring plays for the Titans in a matter of minutes.

The Eagles, however, answered with a score on a 6-yard run from Tait and 2-point conversion to regain the lead at 21-14.

The Oak Mountain defense forced a fumble on the first play of the ensuing drive to put the offense on the Titans’ 22-yard line. Within two minutes, the Eagles went from down 14-13 to now up 28-14 on a 9-yard touchdown run Evan Smith.

Thanks to Smith and Tait, the Eagles took a two-touchdown lead into the half.

“Evan gets more comfortable with the offense every week,” coach Bell said. “He’s probably, at times, maybe too unselfish, but he’s got a good feeling for what’s going on.”

The Eagles kept cruising in the second half, as they outscored Gadsden City 10-9 in the third quarter to keep their distance as the clock wound down.

The Eagles got a 24-yard field goal from Hogan Morton and an 8-yard touchdown run from Smith to pick up the 15-point win.

“I didn’t like the way we finished the game. I thought we put our defense in just too many pickles there at the end, they held as long as they could,” Bell said. “You give a team with that many athletes that many opportunities on that end of the field and eventually they’re going to break through.

“We got a lot of guys back, but we’re still learning how to play when you’re not a severe underdog.

Oak Mountain will now square off with Vestavia Hills at home next Friday.