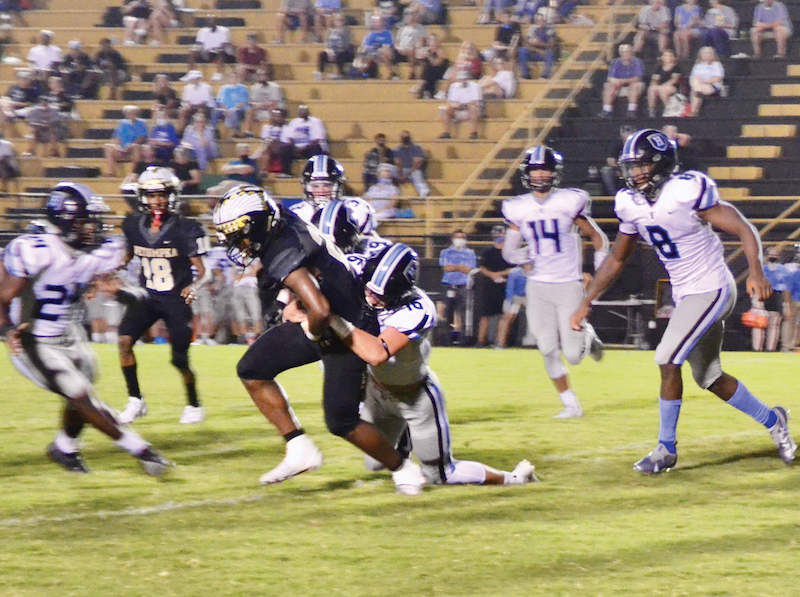 Helena fell short in a strong comeback effort against Wetumpka tonight to fall to 0-1 in region play. (Contributed)

By GRIFFIN PRITCHARD | Special to the Reporter

WETUMPKA – The breeze that blew across West Wetumpka around 9:45 p.m. Friday night was the collective exhalation of the Indian faithful after the Tribe turned away a hungry group of Helena Huskies on fourth down to secure the 28-22 victory.

That character was tested mightily in the second half as the Huskies outscored the Tribe and was one fell-down wide receiver away from heading out of Hohenberg Field one region win richer.

A Wetumpka victory wasn’t in doubt until a fourth quarter interception led to points, moving the Huskies to a 28-22 deficit with time on their side.

A shaky final Indians’ outing seemed to be saved by a Logan Weighall punt that rolled dead at the Helena 7.

“I know y’all haven’t seen us play football, but last year we finished 9-2 and were a second-half ball club,” Helena coach Richie Busby said. “I don’t know what to attribute it to. We practice early in the morning and not out in the heat in the afternoons. The kids in Helena have a lot of guts and a lot of fight. Last week we were down 23 at halftime and took the lead with four minutes to go. That’s the character they have and the mentality they have. I can’t explain it.”

The gutsy Huskies attacked the Indians and put them on their heels using a mixture of runs from Marquis Johnson (112 yards) and Kobe Hughes (80 yards) then quick passes doled out by quarterback McGwire Turner (16-36-1 for 142 yards) to move the ball to midfield.

The drive was almost thwarted. Turner’s pass to the near hash was batted up and nearly intercepted by Justin Crumbaugh.

Crumbaugh had the loose ball in his sights but his momentum kept moving his feet away from it resulting in the defensive Indian falling to the turf empty handed.

“We had that slant and go and the guy was running by himself and all (Turner) had to do was drop it in there,” Busby said. “But that linebacker was able to get his hands up. But (Turner) has played three high school football games. I don’t think we’ll make the same mistakes later in the season.”

Helena continued to move forward to the 16 then to the 8.

A run by Hughes was met by Jaeden Peterson and a host of feathered headdresses for a 3-yard loss.

Turner tossed an incomplete pass setting the stage for the final meaningful play of the game.

All was for naught though, as on fourth-and-the-game, Turner was unable to complete the pass to his receiver. The wide out, a 6-foot-5 big bodied Huskie, slipped on his first step and stumbled to the turf, forced to watch as the ball skidded into the end zone.

The sideline, stands and bands went ecstatic at the realization the Indians had just won the game.

Wetumpka took possession, lined up in the victory formation, snapped the ball one time; and they are now undefeated in the region.

“We came out and had a lot of early success,” Perry said. “But they had the momentum all of the third quarter and most of the fourth. We left our defense on the field too much. We needed to put a drive together (in that fourth quarter) and couldn’t. But, credit to our defense.”

Wetumpka — with youth scattered across the depth chart — jumped out to a 14-0 first-quarter lead.

Junior Indian signal-caller Robert Rose (6-13-1 for 88 yards passing and three scores) connected with Brandon Bowman on a 29-yard pass to move the Tribe to midfield.

Runs by Stone Minnifield (17 carries for 132 yards) moved the ball down the field and into Helena territory.

“For a young man that’s never played running back before, he just keeps getting better and better,” Perry said. “He’s gaining confidence with every game. Rose is the same way. He seems to be getting better each week and you can see his confidence building. This is his first year to start. He hasn’t really started since his freshman year. I’m very proud of the decisions he’s making as a leader and as a quarterback. He’s only going to get better. But I’m proud of the entire team — all of them.”

After being stonewalled on first and goal, Rose called his own number and rushed in from the 5-yard line for the first touchdown of the night.

Alex Londell added the point after and the Indians led 7-0.

A 60-yard Rose ramble set up the next Indians touchdown. The quarterback took the snap and passed to Rudarius Anthony for the 3-yard score.

Again the point after was true and the Indians assumed a 14-0 lead.

The Huskies who, through the first quarter and a half, possessed the ferocity of a stuffed animal found their bark and was able capitalize on an Indians miscue. Helena’s first blips of a scoring offense were a field goal.

The Indians, again led by Rose’s athleticism, added another score to the tally when he tossed a 16-yard touchdown pass to Bowman in the end zone.

Rose — after a pair of runs from Minnifield and Bowman — found Jackson Ray wide open in the front corner of the end zone for the score.

After that, the Huskies found the bite that went along with their bark scoring one the ensuing possession to end the third quarter down 28-9.

Helena strung together a second drive and then used the old school Student Body Right play to punch it in from inside the 2.

They tried to run the same play for two points but were turned away.

On the very next possession, Rose’s pass was intercepted, setting up the game ending excitement.