Montevallo falls to No. 1 American Christian 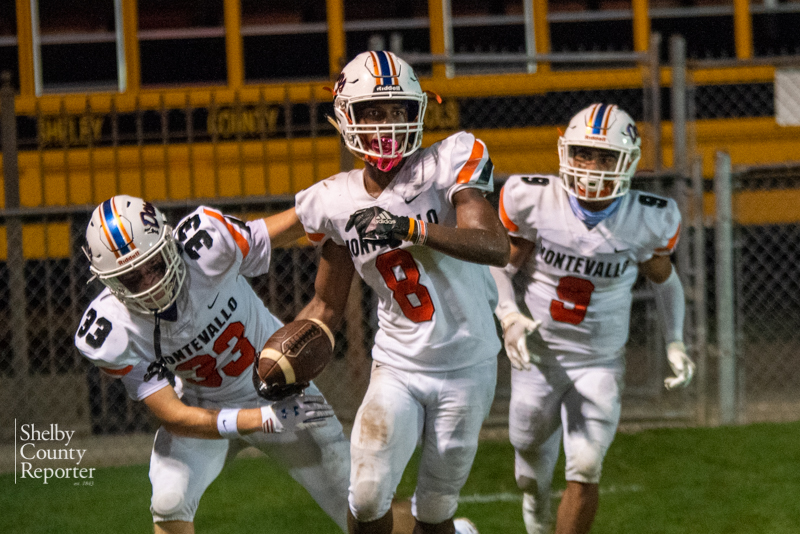 MONTEVALLO – The Montevallo Bulldogs hosted No. 1 American Christian Academy for their 2020 home and region opener on Friday night, Sept. 4th, and despite a good start, the Patriots became too much, eventually pulling away for a 63-31 victory.

After receiving the opening kick, the Patriots quickly took the ball to midfield. But on a fourth-and-2 in Bulldog territory, Orlandis Weeks made a phenomenal play to swat the ball away forcing the turnover on downs.

The Montevallo offense was faced with a very similar situation three plays later. The Bulldogs, however, were able to convert to continue a drive in Patriots’ territory. Just a few plays later, KamRon Goins burst through a hole and outran the secondary to the end zone to give Montevallo the early lead.

After the initial shock of being stopped, the American Christian offense showed why the Patriots are top-ranked team in Class 4A. The second play of the ensuing drive saw Cam Jeffery outrun the entire Montevallo defense for a 74-yard touchdown.

After a stop by the Patriots’ defense, the Bulldogs seemed to have the American Christian offense pinned on a third-and-17 to start the second quarter. Instead, Kamari Lassiter found Sawyer Deerman for a 67-yard touchdown pass.

Four minutes later, Lassiter threw another long touchdown pass to give the Patriots a 13-point lead.

Montevallo fought back on its next drive though. Goins returned the kickoff to the American Christian 49. Two plays later, Joseph Anderson took the ball 45 yards up the middle for his first touchdown of the night.

That was the beginning of a strong night for Anderson, who carried the ball 33 times for 228 yards and two touchdowns, while also totaling four catches for 44 yards.

Despite Montevallo fighting back, however, American Christian answered on every remaining drive in the first half. The Patriots’ passing attack from Lassiter proved deadly as the score at the break was 34-14.

The Bulldogs didn’t stop fighting in the second half despite the large deficit. Gio Hernandez was able to kick a 20-yard field goal for Montevallo, while Anderson and Goins each ran their way to another touchdown on the ground.

But American Christian’s offense was always able to respond to any points Montevallo mustered up. Their passing attack was relentless, and the ground game opened up when it had to. The Patriots lived up their top ranking and defeated Montevallo 63-31.

Montevallo will now get set for another difficult matchup when they host No. 2 Bibb County on Friday, Sept. 11.