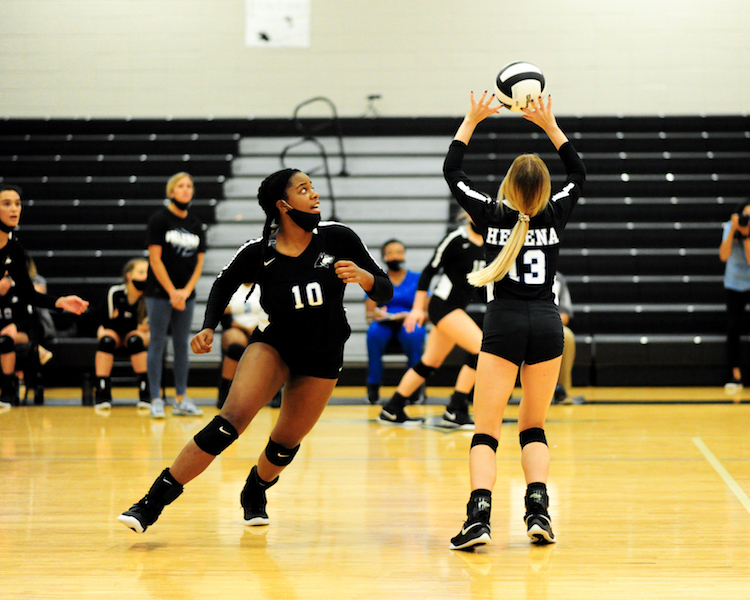 The Helena Huskies took down 5A No. 8 Ramsay 3-1 on Tuesday, Sept. 8, behind strong play from several senior leaders. (For the Reporter/Jeremy Raines)

BIRMINGHAM – The Helena Huskies continue to improve early during the 2020 volleyball season as players gain more experience, and on Tuesday, Sept. 8, they picked possibly their biggest win of the season against Class 5A No. 8 Ramsay.

The Huskies, who have been inconsistent at times against a very difficult schedule, came out and set the tone with clutch play late in the first two sets. While they dropped the third set, they bounced back to dominate the fourth set to close out a 3-1 (25-18, 25-22, 18-25, 25-12) win.

Head coach Amanda Lewis said the team played really well and controlled the tempo of the match, which is something they’ve been working to become more consistent at doing early in the season.

That showed early as the Huskies came out in the opening set and created separation from the Rams. That helped Helena make the necessary plays in a comfortable setting late to pick up a 25-18 win in the first set.

Ramsay came out in the second set hoping to avoid going down 2-0 in the match, and the Rams gave the necessary effort to do that, but the Huskies showed clutch play.

The Rams, however, gained some confidence in a closer set, which led to their best set of the night in the third. Needing a win to keep the match alive, Ramsay got the response it needed by going on a strong late run to pick up a 25-18 win to stave off defeat.

But Helena still just needed one more set victory in the best-of-five to close out the match. And in the fourth set, the uphill climb became too much for the Rams.

The Huskies felt like the better team during the first two sets and weren’t happy with how the third set played out, which led to a much more motivated fourth set.

Helena came out and put together its best showing of the night to finish off the Rams. The Huskies used a strong start to build an early lead and then pulled away for a 25-12 set win to complete the 3-1 match win.

A big reason for the success was the balanced attack from several seniors.

Maddie Rasmussen did a little bit of everything, posting seven kills, four aces, 13 digs and 22 assists.

Mia Johnson led Helena in kills with 13, while Brianna Wilson added nine kills and two blocks. In addition to those performances, Kenzie Sipper added 27 digs to lead the team.