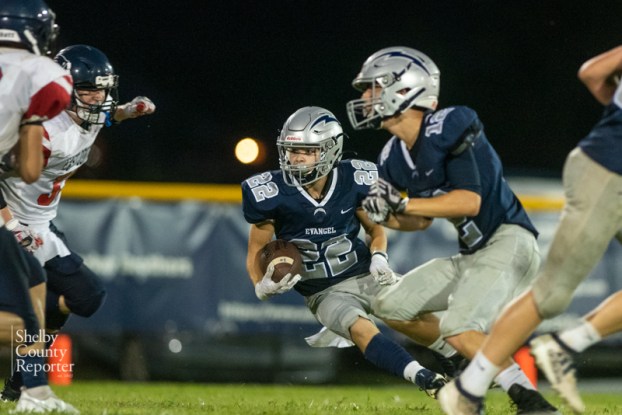 The Evangel Lightning picked up a 46-0 shutout win against Southern Christian on Friday night and have now scored more than 40 and given up six or less in all three games this season.

Evangel improves to 3-0 with shutout victory

“It was a good win for us,” Evangel Head Coach Tim Smith said. “I give them credit, there’s a lot of teams that won’t play us, but they called us. I commend them. They stepped up and gave us a really good shot.”

A pair of early turnovers set up a 26-point first quarter for the ECS Lightning in their first game back to action after an unexpected cancellation Sept. 4. The first was an interception by Timothy Howard on the opening drive, which set up a 27-yard touchdown reception by Jett Lodge from Eli Whitfield.

Daniel Viles punched in a 1-yard touchdown run on the Lightning’s next series, and then recovered a fumble on defense to set up another Whitfield to Lodge TD from 38 yards out. ECS scored twice more to push its lead into the 30s on a Whitfield pass to Caleb Lumpkin and a 47-yard TD run from Viles, who carried the ball five times on the night for 91 yards and two TDs. Evangel closed the first half with a 35-yard touchdown pass to Connor Nettles, entering the locker room up 39-0.

The lone second-half score was Whitfield’s fifth-touchdown pass of the night, and third touchdown reception for Lodge on a 75-yard connection. Whitifled doubled his season passing yards total Friday, completing 8-of-11 passes for 266 yards. The sophomore QB is 18-of-25 with 11 touchdowns and 532 yards in three games. Lodge had five catches for 163 yards and three touchdowns, giving him more than 1,500 yards and 30 TD receptions in the last 15 games.

Evangel (3-0) was scheduled to travel to Tuscaloosa on Sept. 18 to meet North River Christian, but the game was recently canceled. Smith is hoping to find a replacement to not have a second open week in September. ECS travels to Lighthouse Home School in Oneonta on Sept. 25.

By SCOTT MIMS | Staff Writer  COLUMBIANA — The Shelby County Wildcats were looking to go 3-0 for the first... read more