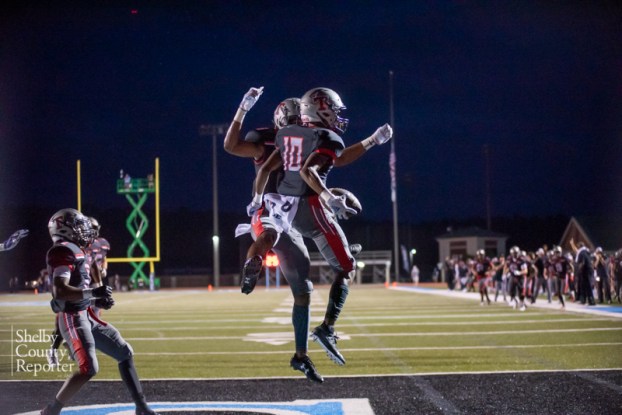 Thompson and Hewitt-Trussville will battle in a region matchup as the top two teams in Class 7A this Friday night in a game that will now air on ESPNU. (Reporter photo/Keith McCoy)

Thompson vs. Hewitt-Trussville game to air on ESPNU

TRUSSVILLE – In what has become one of the better high school football games the last three years due to future Division I prospects on both teams, the Thompson Warriors and Hewitt-Trussville Huskies will play in front of an ESPN audience for the second time in three years when they square off this Friday, Sept. 18.

The announcement was made by ESPN and Hewitt-Trussville High School on Friday, Sept. 11, that the game would be nationally televised on ESPNU.

Two years ago, the two met in a wild matchup on ESPN2 that saw Thompson overcome a rather large second-quarter deficit of 28-0 by outscoring the Huskies 63-21 the rest of the way for a 63-49 victory.

And this year’s contest shouldn’t disappoint either with the two teams entering the game as the top two teams in Class 7A.

In addition to that, Hewitt was able to get revenge last year for the loss on national television the year before when the Huskies handed Thompson its only loss of the season last year by a final score of 35-29.

The Warriors felt like they let that game slip away with mistakes and will be out for revenge as the defending state champs this year, while Hewitt-Trussville wants to prove it can beat Thompson on national television.

Both teams also have a plethora of Division I recruits set to take the field yet again this year, which has become the norm.

Thompson has three defenders ranked as three of the top players in the country. Linebacker Jeremiah Alexander is the oldest as a junior committed to Alabama and a top-10 player in the country, while Peter Woods (DL) and Tony Mitchell (DB) both have offers from most elite programs in the country.

The Warriors also have a junior quarterback in Conner Harrell who just received a Tennessee offer after totaling more than 1,200 yards through four games with a total of 17 touchdowns already. The weapons around him include several others with major offers including Tre Roberson, Sam Reynolds and J.B. Mitchell.

Hewitt-Trussville has no shortage of talent either with Auburn commit Armoni Goodwin at running back in addition to three-star receiver Omari Kelly at receiver and four-star defensive lineman Justice Finkley.

Those are just a few of the names that will be on display when these two teams take the field on ESPNU in what could determine the region champion later this fall.

Helena gets back on track with dominant road win

By RYNE GALLACHER | Special to the Reporter ALEXANDER CITY – After falling behind 14-7 to Benjamin Russell on the... read more