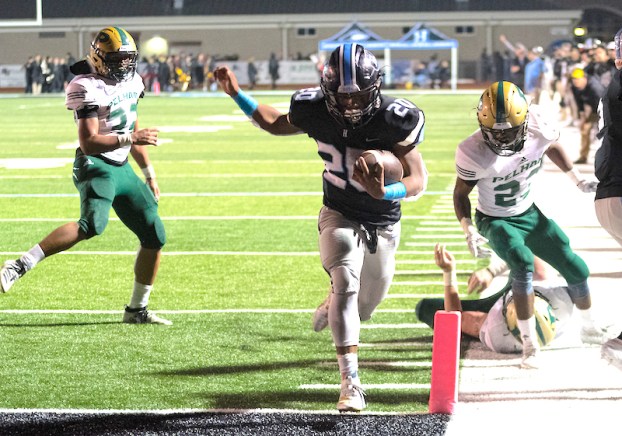 The Helena Huskies will host the Pelham Panthers for the second year in a row in what has become one of the county’s best rivalries. (File)

A week away from the midway mark of the 2020 season, we enter the third week of region play and the fifth week of the season with several key matchups set for Friday, Sept. 18.

We’ve seen a strong start for several teams so far this season, and following our busiest week of the season last week, this is perhaps the week with the best slate of games.

Thompson and Oak Mountain will both be playing in Games of the Week this week as the Warriors take on Hewitt-Trussville and the Eagles take on Hoover, Pelham and Helena will battle in a crucial region rivalry game, Shelby County takes on an undefeated Demopolis team looking to bounce back, Spain Park and Gadsden City look to get back on track following two straight losses, and Vincent looks to make noise with a second win in a row after forfeiting its first three games.

For the story on our Games of the Week featuring Thompson at Hewitt-Trussville and Oak Mountain at Hoover, click here.

Both of these teams started the season 2-0 and have since lost back-to-back games. But Spain Park is coming off two losses to the No. 1 and No. 2 team in Class 7A and seemingly improved as the game against Thompson went along. The Jags ultimately lost to the No. 1 team 48-35, but put up more than 400 yards of total offense. Being battle tested against those two teams, I think the Jags will come out and find it easier to move the ball this week. It seems as if all it takes for them to be successful is to have a positive play on first down on the first play of each drive. If that happens, they get in a rhythm. Watching more tape, the players are going to see what’s working and improve each week. The defense obviously has to improve after giving up more than 40 the last two weeks, but the offense can carry them this week. Head coach Shawn Raney believes they are a playoff team, and this is a game you have to use to prove that. Spain Park 31, Gadsden City 24

You can guarantee the Pelham Panthers have been waiting the last year for this game after Helena beat the Panthers for the first time in school history in dominant 62-20 fashion. This year, the Panthers are off to their best start since 2013 after beating Stanhope Elmore 35-25 last week to improve to 3-1. Helena is also playing well at times and is two losses by six points or less from being 4-0 right now. Pelham, however, has shown consistency, which is what the Huskies have struggled with. Pelham running backs Dylan Peterson and Gabe Gamble are the focal point of the offense with Peterson now having gone over 100 yards in three straight and Gamble with two 100-plus yard games this season. But Helena’s Kobe Hughes came out last week and totaled five touchdown runs, while Marquis Johnson returns more than 1,400 yards from last year. I think you’ll see a tight contest between two physical run games with Helena’s defense having a slight edge. But Pelham has shown more consistency this year, which should make the difference. The Panthers have to get off to a fast start, however, with Helena being a second half team.  Pelham 31, Helena 24

Briarwood is coming off a 43-0 win over Woodlawn to improve to 3-1 on the season, and the Lions have now won their last two games by a combined 63-3. The defense is the highlight, giving up just 11 points per game through the first four. Briarwood’s only loss is 21-14 to 7A Spain Park, a game the Lions led 14-0 at halftime. Now, the get a tough Huffman team that is coming off a 28-7 loss to Huffman. But that game was tied 7-7 at the half. I think Briarwood’s defense should be enough to hold Huffman to 21 or less, but this is a 3-1 Vikings’ team that’s only loss is to the No. 1 team in 6A. If Briarwood wants to not only win this game but compete with the Spartans for the top spot in the region, the Lions will have to find some offensive consistency from receivers and it has to start this week. Briarwood 21, Huffman 14

Last week didn’t go as planned for the Shelby County Wildcats in a 12-10 loss to Selma. The Saints look to be better than expected this season and could be a favorite for a top-two spot in the region, but Shelby County had chances to win and get off to their first 3-0 start since 2008 and just couldn’t make the plays offensively. Coming into the season, the offense was expected to be the highlight with the return of most of the stars on that side of the ball and a solid offensive line after scoring 31.5 points per game last year. But this year, the defense, which gave up 35 points per game last year, has been the highlight. The Wildcats are giving up 10 points per game and that side of the ball is doing everything it can to keep the team in games. Now they get a 4-0 Demopolis team that looks to be the favorite to win the region championship. The Tigers have scored 34 or more in their last three games and are giving up just 14.5 points per game. That said, both teams played Sipsey Valley very similarly. I think Shelby County’s defense gives them a chance yet again this week to keep this game close, but the offense has underperformed and has to get better to win. The schedule after this features a winnable game every week, but this is a chance to get back in the hunt for a top-two seed. Shelby County 14, Demopolis 28

After taking on the top two teams in the 4A classification, Montevallo will now pick up an automatic win. The Bulldogs likely would have won this one anyways with Wilcox not having won a game in more than two years, but nonetheless, the Bulldogs (1-4, 1-2) are in the win column both in region play and overall, which helps their attempt at a run to the playoffs.

It was worth the wait for the Vincent Yellow Jackets, who forfeited their first three games of the season due to COVID-19, forcing them to start the season 0-3 (0-1) before even playing a game. But when they finally took the field on Friday, Sept. 11, the Jackets put together a strong showing in a 39-32 win. They put up 39 points against a defense that had given up 15 or less the first three weeks. Now, they get a Fayetteville team that only scored 14 against Horseshoe Bend, meaning the Jackets should have a chance again this week. Fayetteville won that game 14-2, but the Wolves have lost their other two games to Woodland, 20-16, and Lanett, 30-4. They have yet to score more than 16 in a game this season and losing to a 1A Woodland team that has only scored six points in two losses since, makes you think Vincent has a chance at two in a row. Vincent 27, Fayetteville 20

By CALEB JONES | Special to the Reporter VINCENT – Despite not playing the first three weeks of the season due... read more