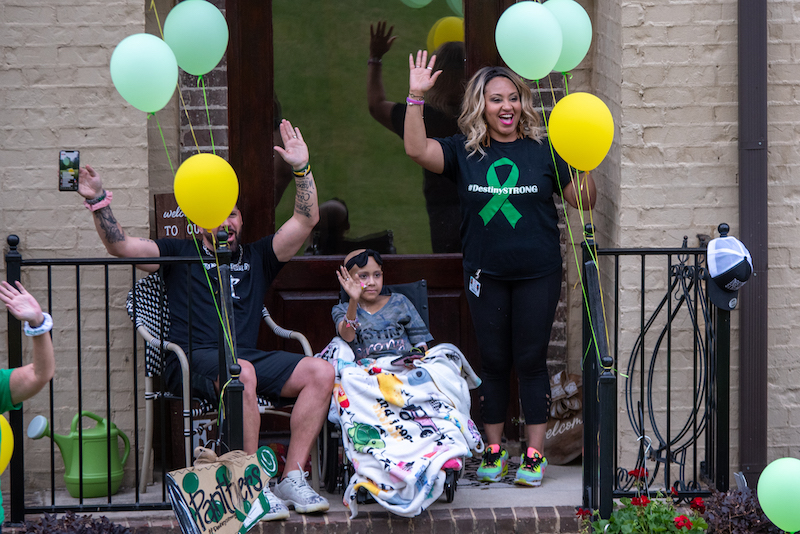 Destiny Riekeberg has been battling cancer for less than a year, but has been a true inspiration and hero to so many during the fight, as many others battling childhood cancer have been as well. (Reporter photo/Keith McCoy)

What would you do if you were told to make plans for your daughter’s funeral in the next week?

That’s the message Lacretia Riekeberg and her husband Dustin recently received from hospice care about their 9-year-old daughter Destiny Riekeberg. But it’s an answer neither the parents nor Destiny were willing to accept.

A year ago, Destiny was living her best life, cheering at youth football games in Pelham, doing competitive dance, playing softball and all the other fun aspects of just being a kid.

Then, over Christmas break, she woke up with pain in her shoulder and abdomen. After four doctor visits finally revealed an enlarged liver, she eventually was sent to Children’s of Alabama where it was determined she had cancer.

The battle since then has been up and down with Destiny fighting every second of every day to beat the disease with a massive support system around her.

But two weeks ago, she was put on hospice care with doctors telling the family there isn’t much more they can do and she could have days or weeks to live. Shortly after, hospice told the family to prepare for the worst over the next week.

But like she’s done all along, Destiny continues to fight and won’t go down without doing so, and her family believes in her.

“I just want everyone to know that we aren’t accepting a death sentence,” Lacretia Riekeberg wrote on Facebook. “The doctors couldn’t tell us exactly how long Destiny has because they don’t know. Only God knows. I’ve made it perfectly clear to hospice that we plan to graduate hospice.

“We’ve not brought Destiny home to die! Trust and believe, I’m doing everything I can humanly and naturally possible to save my daughter and depending on God to do the supernatural.”

For me personally, the last two weeks since reading the sad news have played with my emotions. I’ve prayed for Destiny and her family each night and admittedly have been brought to tears scrolling through the family’s Facebook pages at all of the updates.

You see, cancer has always been one of my biggest fears. My grandfather died from the disease when I was in high school and it’s something I worry about far too often to where I go through funks and make myself sick thinking about it.

And honestly, as I sat down to write this column, I didn’t know where I was going to let my emotions take me, but that instantly changed as I started to read and do more research.

While my fear is one many of us have, people like Destiny and the thousands of children battling cancer give us hope. They show more fight than most of us will in our entire life and bring everyone together to believe in something bigger than us as individuals.

During the last year, Destiny’s life has changed, but not because she let cancer define her. Instead, she has become a true hero to us all.

Her family and friends knew who she was, but now, we all know the special person she is. Through her fight, through her smiles, through her tears, through her pain, through her braveness and through each breath, she has been an inspiration to so many.

Not just those battling the disease with her, but to people in her community, people that have never met her, celebrities and so many others.

Local students and teams are wearing ribbons, sending her encouraging videos and painting cars with #DestinyStrong.

Dodie Osteen, Joel Osteen’s mother, who had rare liver cancer and days to live but recovered reached out to Destiny; Wonder Woman Director Patty Jenkins reached out to her; TikTok superstar Charlie D’Amelio did a TikTok sequenced dance with Destiny; and famous makeup artist James Charles talked with her.

“We make movies about heroes and about people who inspire us,” Jenkins said in her video to Destiny. “But you are a real life one and you are a real life Wonder Woman. I wanted to send you a thanks from us for being that person that lights the way and inspiring us to tell stories about heroes and how brave they can be and how kind and wonderful they can be despite the struggles that they face.”

During Childhood Cancer Awareness month, I ask that you take the time to recognize true heroes in this world. We may look down at young children because of their size, but we need to look up to these inspiring young people because of the fight they show during a time many of us would give up.