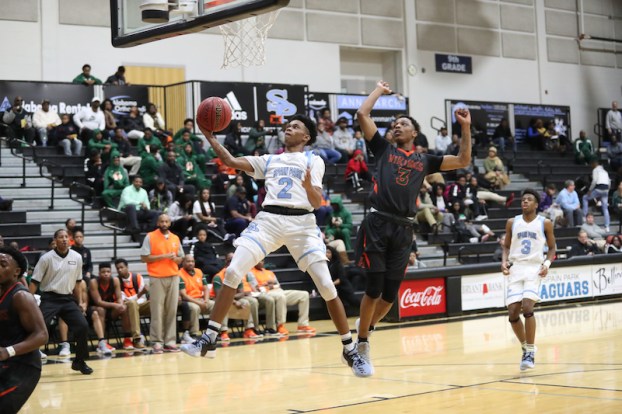 Former Spain Park basketball star Parker Boswell died in a car accident on Thursday, Sept. 17 on his way back to Southern Union where he played college basketball. (File)

When you walked into a basketball gym, you knew who Parker Boswell was. His outgoing nature and competitive banter made him someone people wanted to be around, compete with and play against. And he never was scared of a challenge.

On Thursday, Sept. 17, the former Spain Park basketball star and All-County player died in a tragic car accident, taking Boswell from us far too soon at the age of 19.

When he joined Spain Park’s varsity basketball team during the 2014-2015 season, Boswell was just an eighth grader with a bright future ahead.

Playing alongside future Auburn Tigers Austin Wiley and Jamal Johnson for the next two years, Boswell was in line to be the next big star for the Jaguars following their departure.

But the first time I saw Boswell in a leading role after Wiley left early for college and Johnson graduated a year later in 2017, the Jags were struggling and he was taking it harder than most.

As the leader of the team and expecting to pour in points during his junior and senior seasons, the Jags couldn’t quite get over the hump, and you could visibly see the toll that was taking on Boswell.

Harder on himself than anyone else could ever be, he felt solely responsible.

But the moment I remember most came after a loss during his junior season. Boswell’s mom, Kathy Boswell, who was the bookkeeper at the time, asked me to speak to the team after another difficult loss hoping I could spark something in them.

I stepped into a locker room full of players that had been through an up-and-down season, but Boswell’s ears were perked and he was listening intently.

That was something I noticed right away.

Over the next year, Boswell dealt with so much as a player, continuing to be hard on himself, while also having new head coach Chris Laatsch take over before his senior season.

But during that time, you could see Boswell grow as a person, a basketball player and a teammate.

On the court, he started to share the ball and bask in both his success and the success of the team. Off the court, he was one of the most beloved students at Spain Park.

Always seen with a smile on his face, he was the kind of person people wanted to be around.

Even after games, he’d come up to me or my photographer and just start chatting about how the game went—bad or good—always wondering what he could have done better from our perspective. But he always did so with laughs and a smile.

Then, on senior night at the end of the 2018-19 regular season, Boswell left with a lasting memory. He poured in nine points to be the team’s second leading scorer in an upset of No. 2 Hoover.

During his time at Spain Park, he didn’t turn into the next major Division I recruit; instead, he became something bigger—an amazing person we could all look up to for the way he handled the everyday aspect of life.

He worked his tail off both during practice and going to the gym with his dad outside of practice to become the best he could be.

And that legacy is something that will live well beyond Sept. 17, 2020.

Following the news of his death, former coaches, teachers, teammates, opponents, friends and even people that barely knew him shared their thoughts on the remarkable young man he became.

You could have scrolled through social media sites for an hour on Thursday night and not even scratched the surface of those who reached out sharing their thoughts and memories.

It is never easy to see an athlete or coach that I’ve covered die. There aren’t enough tears and prayers to make that immediate shock go away.

But to see the outpouring of support, and the impact they had in their lives, always solidifies what a remarkable person they were. And despite leaving us too early, we realize they’ve left a lifelong impact on us with a legacy that will live on.

That’s no different for Parker Boswell.