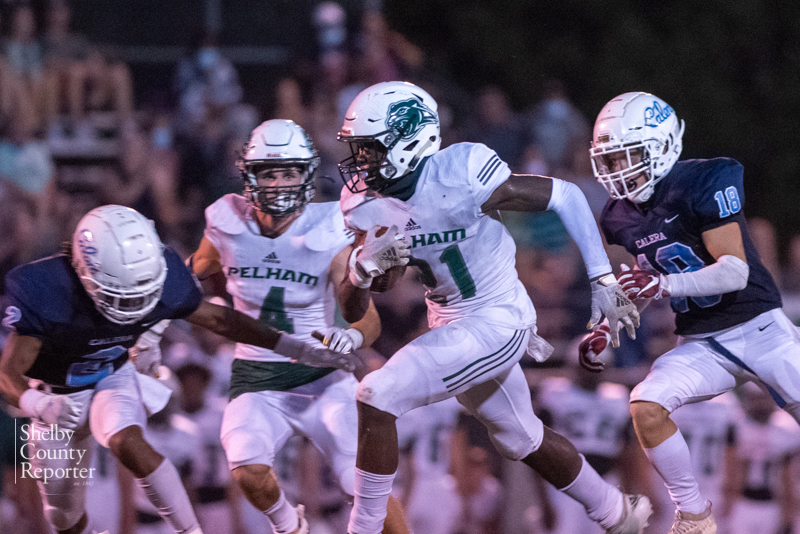 Through five weeks of play, we have now hit the midway mark of the 2020 football season, which means teams get a break from region play this week as we head into the second half of region play.

But that doesn’t mean there isn’t a lot on the line this week nor does it mean we have a lack of good matchups. With teams hoping to chase down a playoff spot during the final few weeks of region play following this week, they’ll be hoping to have momentum with solid performances this week.

Pelham vs. Chelsea (Game of the Week)

With both teams coming off bye weeks after Pelham’s game with Helena was canceled, they’ll be fresh for this county battle. The Panthers are off to their best start in seven years, while Chelsea is struggling so far this season at 1-3. The Panthers’ success is coming behind the run game of Dylan Peterson, who has topped 100 yards in three straight games, while Gabe Gamble has gone over the century mark twice in their four games. Chelsea’s defense is the strong suit of the team and is playing well despite being on the field a ton, but the offense has to be better moving forward after scoring three or less in three of their four games this season. With the weapons Pelham has, it’s tough to see the Hornets keeping up unless the team found an offensive resurgence during the bye week. Pelham 28, Chelsea 14

For the 2nd time this year, we get the No. Class 7A team taking on the No. 1 Class 6A team. To kick off the season, Thompson beat Oxford and now get Mountain Brook who is 4-0 on the season and the current No. 1 team in Class 6A. But the Warriors are coming off the ultimate confidence boost with a 35-21 win against No. 2 Hewitt-Trussville last week.

Thompson is now averaging 45.4 points per game and looks to have arguably the state’s best offense. Mountain Brook brings one of the best defenses in the state to the table, giving up seven points per game so far this season, but the Warriors put up 35 on Hewitt last week, who had given up 19 or less in every game this season until then. Thompson’s defense also looked strong, giving up 21 to a Hewitt team that scored more than 40 in all of its other games.

The Spartans’ offense, however, has struggled this season and seems one dimensional with the run. It’s tough to see them having enough to keep up with Thompson’s dynamic offense. As long as the Warriors don’t get complacent after winning against No. 2, they should remain undefeated this week. Thompson 35, Mountain Brook 14

After picking up their second area win in three seasons two weeks ago against Chilton County, the Calera Eagles will now enter a matchup with Pell City believing they are the better team. The Eagles, who are now 2-2 on the season and 1-1 in region play, seem to be getting better each week. More importantly, a team that has struggled in the second half of games the last few years in the 6A classification because of exhaustion, they’ve almost gotten better in the second half this season. Calera has played tight games against Demopolis, Pelham and Mountain Brook, playing great in the second half of all three, while also performing well late in the win against Chilton county. Pell City is sitting at 1-3 this season and has scored 20 or less in every game so far this year. If the Eagles are trending in the right direction with a talented group of younger players, they should win this matchup. That looks to be the case, but they truly are young, which means anything can happen. Calera 24, Pell City 17

After their original game was canceled with Mortimer Jordan, the Briarwood Lions were scheduled to play McAdory this Friday, but after that game was canceled Monday, the Lions are now scheduled to 7A James Clemens. The Lions have technically already picked up a win this week due to Mortimer Jordan’s forfeit, but now they get to compete against a difficult opponent to get ready for the second half of region play.

It has been an impressive start to Briarwood’s 6A campaign this year. After making the leap up from Class 5A in the offseason, the Lions are off to a 4-1 start (5-1 after this week) this season and are seven points away from being 5-0. They also sit at 3-0 in the region standings in a tie for first with No. 1 Mountain Brook. Briarwood has used the typical recipe of defense and a methodical run game on offense to look like the contender it was in 5A a season ago. The defense is giving up just 12 points per game and has yet to give up more than 21 in a game this season, while the offense is getting better each week and doesn’t have to feel stressed with such great play on the other side.

Now, they’ll take on James Clemens this week, who is 3-2 with one forfeit loss. The Jets have scored 54, 28 and 35 in their last three games, making their offense against Briarwood’s defense the fun aspect to watch. This should be a very comparable game to the Spain Park game for the Lions, which they lost 21-14 after giving up 21 unanswered in the second half. Their defense will keep them in every game, but James Clemens should have more depth. Briarwood 14, James Clemens 20

It’s not a region game, but this is a massive game for both teams momentum wise. Shelby County has struggled the last couple of weeks and looks to be on the verge of possibly putting both sides of the ball together, while Chilton County has struggled to a 1-3 record so far. The Wildcats have shown promise at times, largely thanks to their defense, but the offense has to come along for them to reach their full potential. If they can put it together this week and pick up a win, there is a strong chance they win out. Shelby County 28, Chilton County 27

Cornerstone hasn’t played the last two weeks due to COVID-19, forfeiting two weeks ago and picking up a forfeit win last week. Now, the Chargers, who have yet to win a game head to head this season, will take on an Abbeville team that is 3-1 and has scored 28 or more and given up 13 or less in three wins. With Cornerstone’s offense struggling, it will be tough for the Chargers to keep up. Cornerstone 13, Abbeville 35

Evangel is off to a strong 4-0 start and continues to roll along offensively, but this will be the Lightning’s most difficult matchup of the season thus far. Lighthouse is 3-0 on the year and playing consistent on both sides of the ball. That said, Evangel has scored 40 or more in every game and given up 20 or less in every game. Evangel 42, Lighthouse 20