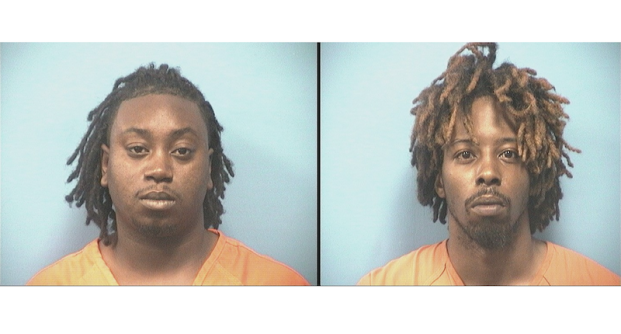 Anfernee Jordan Brown, left, and Vontarious Dameko Brown were arrested and charged with attempted murder in a shooting that killed a man and injured a woman at a party in Alabaster on Sunday, Sept. 20. (Shelby County Sheriff's Office)

ALABASTER – Two arrests have been made following a shooting at a party in Alabaster during the early morning hours of Sunday, Sept. 20, killing one and leaving another seriously injured.

The Alabaster Police Department announced the arrests of Anfernee Jordan Brown, 25, of Calera and Vontarious Dameko Brown, 24, of Wilton.

Both have been charged with attempted murder and are currently in the Shelby County Jail on bonds totaling $300,000 each.

“(These are two arrests) in the ongoing investigation into a shooting that took place early Sunday morning that resulted in a young woman being seriously wounded and a young man losing his life,” Alabaster Police Chief Curtis Rigney said. “This investigation will take time to fully complete and will need the cooperation and support of the citizens of Alabaster to bring justice for these victims and their families.”

According to Rigney, the incident happened at a party in Alabaster at approximately 1:30 a.m. on Old Highway 31 near 10th Avenue S.E. That’s when multiple shots were fired, leaving one woman and a male shot several times when police arrived.

APD is currently investigating the shooting to figure out what started the incident and who is responsible. Currently, no arrests have been made.

If anyone has information about this shooting, the APD is asking that you call and speak with a detective at 205-663-7401 or the Shelby County Sheriff’s Office anonymous tip line at 205-254-7777.

FROM STAFF REPORTS The University of Montevallo has waived the ACT/SAT test score requirement for admission, and is offering scholarships... read more