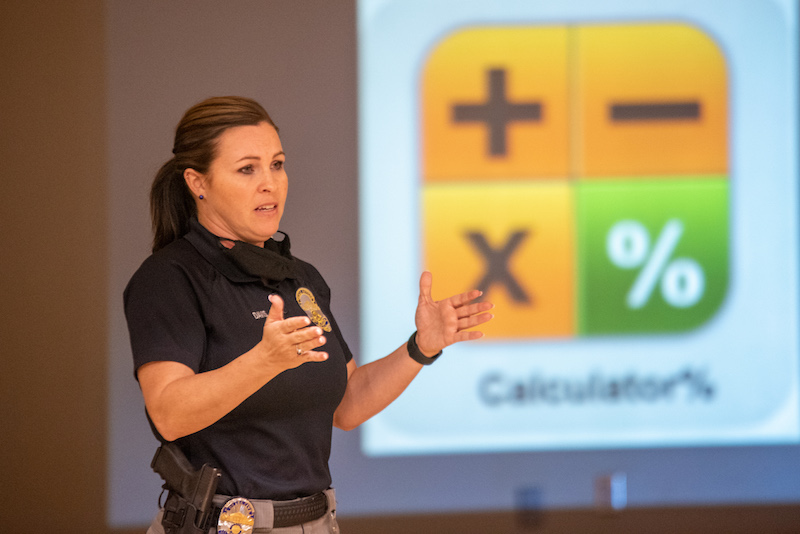 Helena Police Department Investigator Amanda Davis offered a cyberbullying class for parents to teach them about the dangers of the internet for young people. (Reporter photo/Keith McCoy)

The class was held at the Helena Sports Complex at 6 p.m. on Sept 21, and was offered through the Compact 2020 task force that Davis works with. The task force is designed to help juveniles who are considered high risk, to find resources and help.

Davis started the presentation by relating her own personal experience to her own children to relay the importance of security.

“I did not think it was ever going to happen to me,” she started. “Because I’m a cop right? I thought my kids were never going to do that.”

She went on to explain that because children, especially younger children are more trusting, they tend to be more vulnerable to online predators.

Davis explained how some of the different apps that children are more likely to use leave them vulnerable to online predators. She explained that apps like Snapchat, Tinder, WhatsApp and others that teens tend to use expose their data and often share their locations.

Davis encouraged parents to keep a close eye on their children’s phones and gave tips on what to look for, including using seemingly innocent apps to disguise some potentially dangerous content.

For parents that want to monitor their children’s app use Davis gave some instructions on how to find which they are using. This involves opening the App Store on their phones, looking through the “secret” section in their downloads or app purchases. If the app you’re looking for says “open” then the child already has the app.

Davis said that she had heard from parents in town that some children had been targeted whether by predators or through cyber bullying, which Davis said many parents have recently told her their children were experiencing.

“I was under the impression that I should give my child some freedom on their phone and I didn’t keep the check on it that I should have,” she explained. “I learned quickly that the internet is not the safe place I thought it was.”

Davis said that she wanted to use this class as a way to offer herself and the Compact 2020 task force as a resource to parents who are concerned about their kids virtual and physical safety.