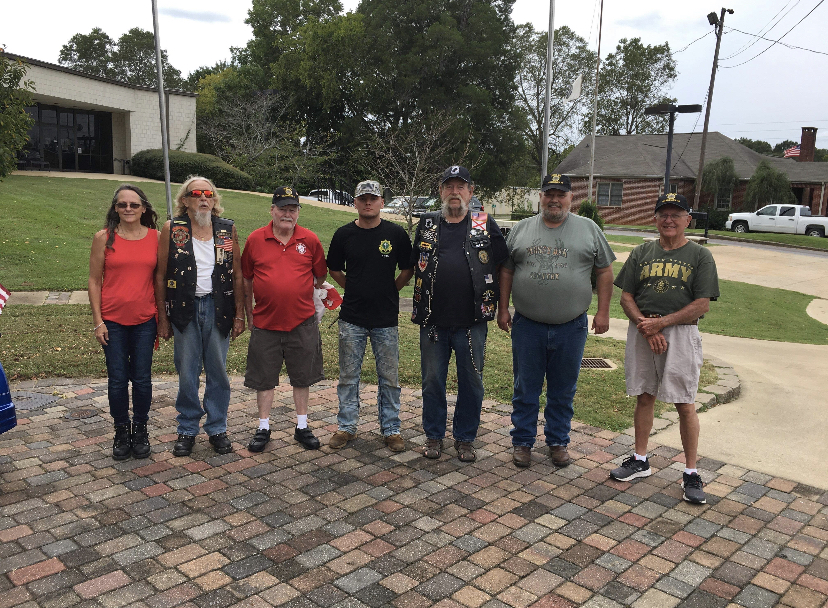 Members of Columbiana’s American Legion held a POW/MIA flag ceremony on Sept. 18 to honor those that are or were prisoners of war or missing in action. (Contributed)

On Friday, Sept. 18, at City Hall in Columbiana, a quiet ceremony happened in front of City Hall that only a few were present for. American Legion Post 131 took a few moments to remember those in our military who were prisoners of war or missing in action. This happens every year on the third Friday of September, all over our country as a way to honor and support those veterans and their families touched by such events.

The men and women of Columbiana’s American Legion took a quiet moment to lower the U.S. and Alabama state flags, then raise a P.O.W. flag that belonged to the family of P.O.W. Clarence E. Goodwin, known as “Pop Shorty,” all the way to the top of the flag pole and then to half-mast where it flew for one hour. The flag was then removed and folded by members of the post to be returned to the family who donated its use for this purpose.

For members of the Legion, this is a ceremony that has great meaning and purpose as they honor fallen and missing brothers and sisters in arms.

“Veterans helping veterans” is the motto you’ll hear from Sam Horton and Tom Barnes, leaders of Columbiana’s American Legion post if you sit with them for any length of time. They, as well as their brothers and sisters of post 131, are passionate about making sure, not only that no veteran in their community is forgotten, but that their needs are met as well.

Recently this local organization expanded in two ways that will help them move forward with that mission. An Auxiliary charter and a Riders charter has become available to the community through Post 131.

The American Legion Riders are veterans that are part of the Legion who ride motorcycles. This facet of the national organization has been very successful when it comes to raising funds not only for the needs of vets but also for local hospitals and other charities that support their communities. They also serve as escorts for funerals and other events.

The American Legion Auxiliary is made up of mostly women, and a few men that are spouses, children or parents of veterans. They serve as support for the veterans at larger functions and in fundraising and in other capacities that help the Legion meet the mission of taking care of veterans and the communities they live in. President Donna Barnes told us, “We are small in numbers right now but are putting in the time that will ensure that the auxiliary grows so that the Legion post can be its best.”

Post 131 is looking for a few good men and women to join their ranks in all areas of their organization. To find out if you qualify as a member and how you can get involved with the American Legion or the American Legion Riders, you can call post commander Sam Horton at 205-572-2115. To find out more about qualification for membership to the new post 131 Auxiliary, call President Donna Barnes at 205-903-6948.