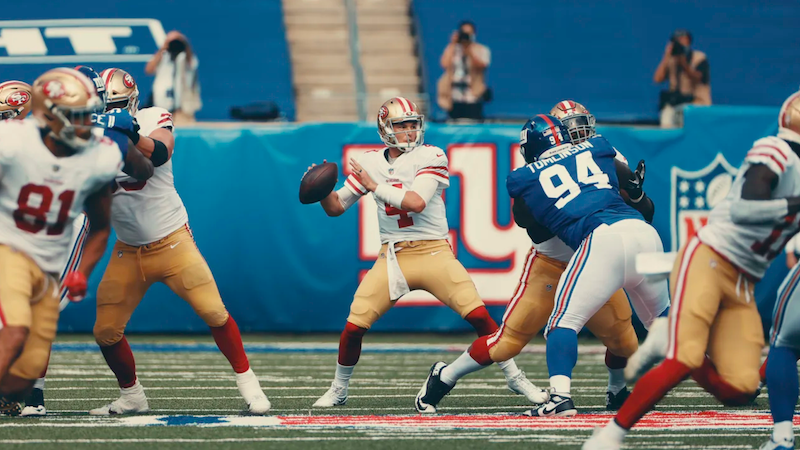 EAST RUTHERFORD, N.J. – Stepping in for injured starting quarterback Jimmy Garoppolo, Nick Mullens made history for the San Francisco 49ers in a 36-9 victory against the New York Giants on Sunday, Sept. 27.

It marked Mullens’ ninth start of his career after starting eight games during the 2018 season for the same reason. During that season, he came in and threw for 2,277 passing yards, which were the fourth most in an NFL player’s first eight starts in league history only behind Patrick Mahomes, Andrew Luck and Cam Newton.

“First you come into the NFL and you’re just trying to get comfortable different situations, but the way coach Shanahan has motivated us as a team telling us we can handle anything. You control what you can control and work to get better every day,” Mullens said during the week. “That’s the daily mindset that I have and that you have to have to get better.”

Since that season came to an end, Mullens has worked on his game to be even more prepared for his next opportunity.

“It starts with arm strength. That’s the thing everybody is going to criticize, but it’s one thing I’ve attacked,” Mullens said heading into the week. “Playing with the full field, that’s huge to me, and I’m excited to show that. Plus, being in the system for four years now. How crisp, how automatic, how professional can you be? That’s one thing I’ve focused on every single day.”

And he was crisp.

Mullens threw for more than 300 yards in his debut this season on 25 of 36 passing with one touchdown. He also didn’t throw an interception and was only sacked twice. He led the Niners on several long drives and ultimately the win to help the team improve to 2-1 on the young season.

“I felt really good, I felt really confident in my preparation,” Mullens said after the game. “Coach (Kyle) Shanahan talks about the buildup. It all builds up to Sunday and by Sunday, you’re just as confident as you can be. I approached it with a relaxed mindset and was ready to go out and execute.”

And with San Francisco coming off a Super Bowl appearance where they lost to the Kansas City Chiefs 31-20, Mullens’ role as a backup this year is key to keeping this season on track with hopes of returning this year.

“Nick was great. He was very poised,” Shanahan said after the game. “We went on a lot of long drives today, which they’re better than not scoring. The long drives can get a little bit exhausting. Especially for me, as I don’t want to have to call that many plays. But Nick kept his composure.”

It’s unclear how long Garoppolo will be out with his high ankle sprain, but if he is out in the 49ers’ next game against the Philadelphia Eagles, Mullens will get a primetime matchup on Sunday Night Football on Sunday, Oct. 4.

Another start would also mean some more pylon fun. Over the last two weeks, Mullens has become known as the pylon fixer, calmly picking up the orange end zone marker and placing it back where it belongs after each score, which has gotten some national attention.

“I was just kind of messing around the first time, and today an O-Lineman grabbed it and was like ‘Hey set it up.’ I was like, ‘Alright, I guess I’ll keep riding with it,’” Mullens said. “It’s just fun to play with your teammates. Guys have the right mindset to attack, attack, attack, and then have fun when you score. That’s why I love this team.”

Mullens will hope to continue attacking and end zones and sprucing them up while also trying to continue a historic stretch as a quarterback for the Niners moving forward.

Teams jump back into region play during a busy…