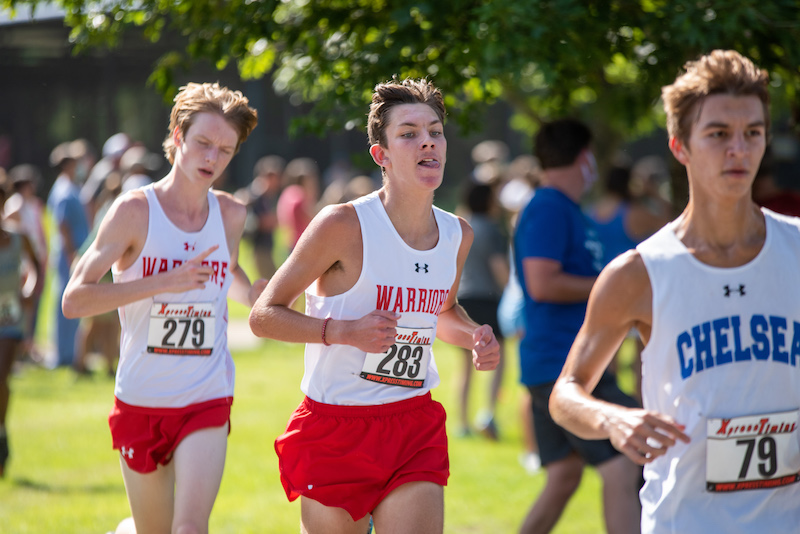 Thompson's Jackson Hamlin, above, was one of the top 10 finishers in the race. (File)

Teams from across the state, including several local teams, traveled to Veterans Park in Hoover off the campus of Spain Park High School to compete in the Twilight Meet Under the Lights event, which sees teams running on a lit up course in one of the more anticipated events of the cross country season.

And for local teams Spain Park, Oak Mountain, Briarwood, Thompson and Westminster at Oak Mountain, they took advantage and capitalized on the opportunity with impressive performances.

At the end of the 5,000-meter run, Keith Warner made sure it was a Spain Park Jaguars standing atop the podium after the sophomore finished the race in 17:04.64 to claim the top spot in the race by seven seconds.

That first-place finish wasn’t just special for him, but was one of two top five finishers for the Jags in the event, as they went on to finish second in the overall team standings behind Hoover.

The other top-five finisher was another sophomore, as Kenneth Bishop finished 13 seconds behind his teammate with a time of 17:17.78 to claim fourth in the event.

But Hoover’s three finishers in the top six and six in the top 20 made the difference in the final standings with the Bucs posting a low of 38 points compared to Spain Park’s 68.

Just behind the Jaguars in third were the Oak Mountain Eagles and junior Reese Bell was a big reason why. He finished seventh in the race thanks to a time of 17:46.74. With no Walker Cole, one of the state’s best runners, Bell was able to post his second highest finish of the season.

The Briarwood Lions and Thompson Warriors also finished highly in the team standings with the Lions claiming fifth and the Warriors sixth.

The two teams also claimed the eighth and ninth spot in the individual standings via Jackson Hamlin and Trent Malloy.

That actually marked Malloy’s lowest finish of the season to show how dominant he has been. The senior has second twice, first once and now ninth.

Each team also had several more finishers in the top 30 of the standings.

Briarwood’s two other top 30 finishers were Joseph Bell and Patrick Hnizdil, both of who have had strong seasons so far. Bell finished the race in 18:15.42, which was good enough for 15th, while Hnizdil finished 30th with a time of 18:56.70.

Westminster School at Oak Mountain finished ninth in the team standings and was led by Andrew Purcell, who finished 34th with a time of 19:03.13.