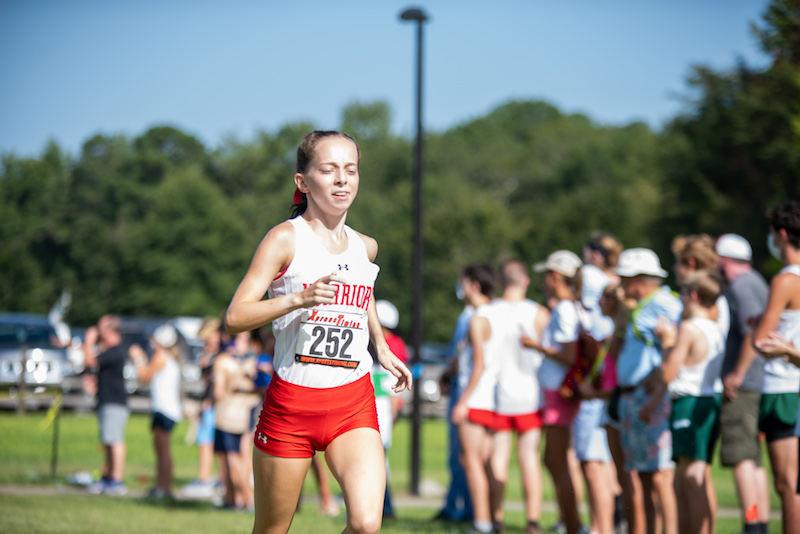 Thompson's Emily Allen finished ninth at the Spain Park Twilight meet as one of the highest finishers in the county. Local runners made up six of the top 10 spots. (File)

HOOVER – Local runners shined under the lights at the Spain Park Twilight meet held on Saturday, Sept. 26, at Veterans Park in Hoover with runners from Westminster at Oak Mountain, Spain Park, Oak Mountain and Thompson accounting for six of the top 10 finishers in the event.

None shined more than Westminster’s Hallie Porterfield, who is off to a fantastic start. The senior for the Knights ran the race in 20:24.58 to finish first in the event and pick up her first win of the year.

Even though it was her first victory, her season has been dominant so far, finishing sixth, fifth and second in her other events, which were also big events.

She was the only runner inside the top five from Shelby County, but local athletes made up the rest of the top 10, taking every position from sixth through 10th.

Spain Park’s Mackenzie Culpepper was the highest of those finishers taking the sixth position with a time of 21:50.11. It marked a strong showing in her first event of the season.

The Knights added a second top 10 finisher thanks to Courtney Callahan finishing the race in 21:54.62 to claim seventh.

Oak Mountain had two in the top 10 as well with Lauren Cole and Emma Grace Phillips finishing eighth and 10th, respectively. Cole finished the race in 21:58.08, while Phillips ran the event in 21:59.34.

Between those two Eagles was Thompson’s Emily Allen, who finished ninth with a time of 21:58.59. It marked her second event of the season after finishing fifth at the Warrior 2 Mile Invitational.

There were several other standout performances as well with five other top 20 finishers and seven more inside the top 30.

Finishing between 15th and 17th were Oak Mountain’s Lexi Ray, Spain Park’s Peyton LeCroy and Briarwood’s Adrienne Goolsby, respectively. All three finished the race between marks of 22:33.68 and 22:37.93.

Oak Mountain’s Katie Wright finished just behind her teammate in 23rd with a time of 22:58.92.

Spain Park’s Delaney Vickers added another high finish for the Jaguars by claiming 27th with a time of 23:33.80.

Indian Springs also had one finisher crack the top 30 with Elise Picard finishing 29th thanks to a time of 23:40.21.