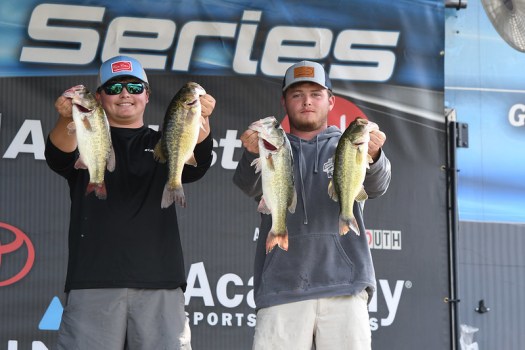 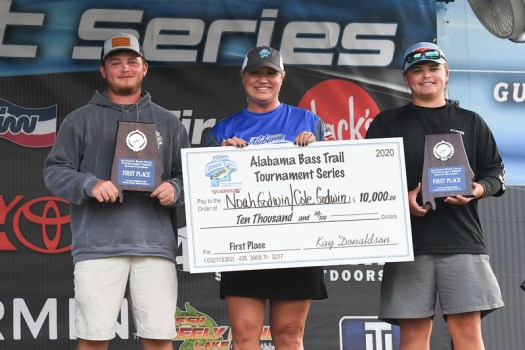 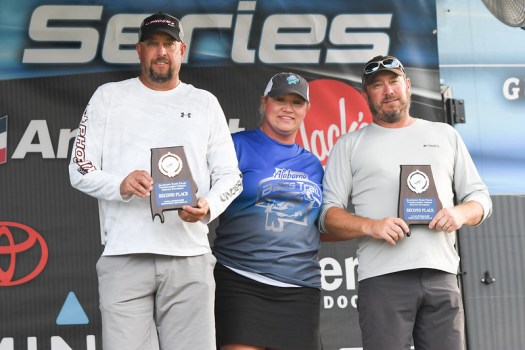 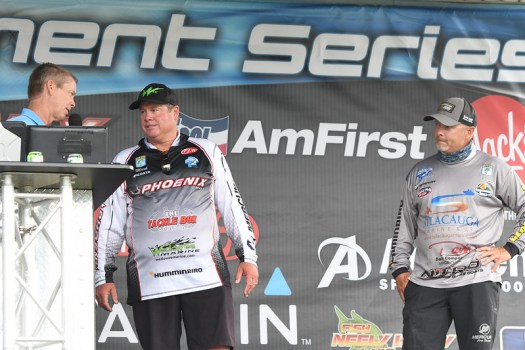 Mark McCaig and Tim Hurst claim AOY in the South Division with 1013 points.

By JASON DURAN / For the Reporter

COLUMBIANA — The Alabama Bass Trail South Division closed its season on Lay Lake just how it started—with the Godwin brothers on top.

The team of brothers claimed another win in just their second season fishing the ABT. Their first win was the season opening event at Lake Jordan. With that win they became the youngest team to ever win an ABT Event. They back that win up strong with another win this week and add their names to the short list of teams that are two-time ABT single season winners.

The ABT season was spread out a little longer due to COVID-19. This event, originally scheduled as a spring event in March, was rescheduled for September. Throughout practice the conditions changed, the cloud cover and cooler air temps caused water temps to drop 10 degrees. That caused many teams to target the shallows where fish would be actively chasing bait in a pre-fall time pattern. However, on Saturday the air temps climbed back into the 80s and the clouds gave way to a bright and sunny day. Anglers shared that they felt this pushed fish off the areas they found in practice and moved them around some. Teams spent the day trying to relocate fish found in practice and adjust to the conditions, and the Godwin brothers made the right adjustments to bag 16.05 to take the win.

The brothers said they started out the morning like most other teams, fishing grass and looking to capitalize on the practice from day before when they were “shaking lots fish off in the grass.” However, due to the changing conditions the fish just weren’t there for them.

Noah said, “We really had a slow start to our day; we didn’t catch a keeper till about 9 o’clock when we pulled up on an offshore spot and for about 10-15 minutes, we caught them every other cast.”

This was one of about 50 spots they tried out deeper in practice and the only one that they were able to catch fish on. They described this spot as a hump in about 12 feet of water with stumps on top. The area just off the side of the hump was in 20 feet of water. They targeted these fish using a Strike 6XD in Natural Shad and Tennessee Shad 2.0. They made casts up on the hump to get the fish fired up.  After catching a solid limit on the deep spot, they made a move and headed back to check the grass bite again. They were able to catch a few fish in the grass burning a Zoom Horny Toad in green pumpkin pearl with a 5/0 6th Sense Hook. They thought they were going to be able to cash a check and were excited to get another win against this great field of anglers when the scales closed and they were on top.

The second place team was also a team of brothers. Dan and Rob Graham said practice for them was good on Thursday but worse on Friday. They decided to spend tournament day doing what they did Thursday in practice. They “spent all day in one area trolling around in the water just fishing.” They targeted scattered grass and lily pads. Using a Strike King 3/8-oz Hack Attack Green Pumpkin Jig and a Spro Frog in Lepard.

Dan said, “The fish bit for them all day, but the after lunch bite was really better.”

They worked well together as a team, Dan would through the frog and Rob would follow up with the Jig until they got in active fish areas and they would both throw the frog. The weighed in 14.36 of all largemouth. They said they fished really clean all day, did the best they could and were happy with a second place finish.

The team of Mark McCaig and Tim Hurst claim AOY in the South Division with 1013 points which they described as “a really a big accomplishment.” They said this was an eight-month long journey.  Mark said the only thing they did different this year was not “trying to make something work that wasn’t working.” Looking back for them this year Mark said a key moment for them was when Tim caught a fish at Jordan that put them in the top 40.

Mark said, “It was at Jordan that Tim saw a tree sticking way out on the Garmin Panoptix, made a cast and caught a fish. He continued, “on the way home, I realized that if he hadn’t made that cast, we would have finished below 60th. Looking back that was a key to this win.” They fished both divisions this year and won a North Division event at Weiss lake. They also finished ninth in the points in the North Division.

Download and listen to the ABT Podcast on your favorite Podcast app by searching for “Alabama Bass Trail Podcast.”  The Podcast is released each week on Tuesday.

For information about Alabama Bass Trail and for complete tournament standings, visit Alabamabasstrail.org.