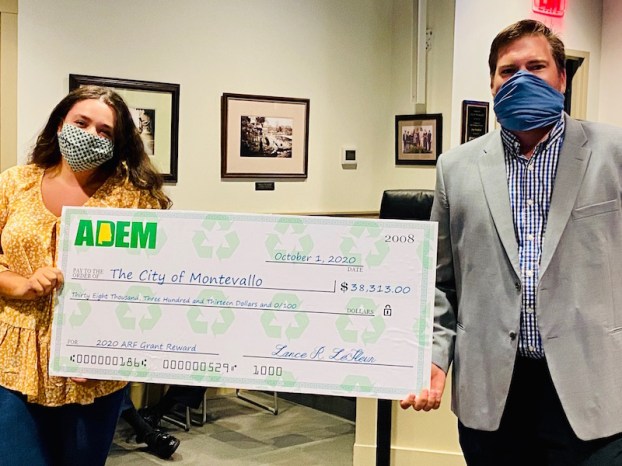 MONTEVALLO – If Montevallo residents are curious about how the city’s sustainability efforts measure up, they can find the answers in the recently released 2019-2020 annual report.

“Our slogan has been ‘leading by example,’ and I want other cities to be inspired by our small but mighty town,” Barone said.

In the last year, the Montevallo Recycling Center has added programs including donation bins to the local thrift store, plastic film recycling and electronics recycling.

In a partnership with Commute Smart Birmingham, three additional bike racks have been installed along the Main Street corridor.

Regarding energy savings, the public parks, fire department and city hall are equipped with LED and motion sensor lights.

“The city of Montevallo is incredibly proud of the mark we are making on the landscape of Alabama with respect to our sustainability initiatives,” Mayor Hollie Cost said. “Our new sustainability coordinator, Ms. Olivia Barone, literally hit the ground running when she arrived in town less than a year ago. Prior to her arrival, we were being recognized across the state as being progressive and forward-thinking based on our commitment to sustainability. This was largely in part due to our strong collaboration with the University of Montevallo.”

“Since Olivia’s arrival, due to her enthusiasm, commitment and incredible knowledge base, the bar has been elevated,” Cost said. “We’ve significantly enhanced and streamlined our recycling, secured multiple grants to support our sustainability initiatives, completed an extensive audit and prioritization of our pedestrian and cycling infrastructure and are on the cusp of replacing all of our current street lights with LED. It is our desire to do all that we can to set the standard for sustainability within the state and strongly support other communities who strive for the same goal.”

“In less than one year, she has secured grants at the recycling center, changed the way Montevallo citizens recycle and worked with Alabama Power Company to change out the street lights to LED lights,” incoming Mayor Rusty Nix said. “Looking for more great things down the road.”

She awarded Diane Johnson the first Certificate of Recognition for her extraordinary volunteer work at the recycling center.