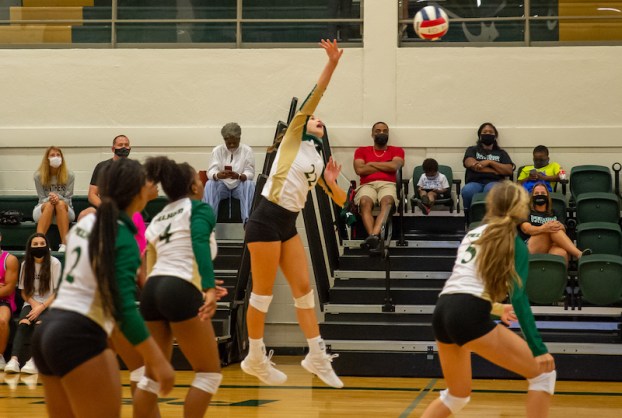 The Pelham Panthers took down Helena in a dramatic five-set thriller on Tuesday, Sept. 29. (For the Reporter/Larry Dancy)

HELENA – Rivals Pelham and Helena had another classic volleyball match on Tuesday, Sept. 29, with the Panthers sneaking out a 3-2, five-set victory against the Huskies.

Marking a region rivalry, the two teams have battled as two of the top teams in the state the last several years, and despite losing several starters the last couple of years, this year’s matchup was as thrilling as usual.

The Panthers won the first two sets and seemed to be en route to a 3-0 sweep, but Helena then found a rhythm and remained alive in the match with two-point wins in the third and fourth sets.

But in the final set, the Panthers somehow overcame losing momentum in the match and handled the exhaustion well to pick up a 15-11 victory and pull off an electrifying 3-2 match win.

In the opening set of the night, the Panthers seemed to be setting the tone early. Pelham jumped out to a 4-0 lead on serve and eventually extended that to 9-1 shortly after.

Helena fought back throughout the set, but never could erase the large early deficit, as the Panthers went on to kick off the night with a 25-18 win.

In the second set, neither team was able to hold serve for a long period of time, which kept it tight. While Pelham wasn’t playing as well as the first set and Helena was playing better, the Huskies couldn’t find that sustained success on serve needed.

The Panthers ended up capitalizing late with a short run of four points won on serve, which led to a 25-23 win and a 2-0 lead.

Despite the 0-2 hole, the Huskies felt as if they gained some confidence during the second set and knew they were just a couple of service points from being tied 1-1.

After a back-and-forth third set, the Huskies capitalized on that and finally found a rhythm at the service line to win eight points in a row to pull off a comeback 25-23 victory.

That was the start of two exciting sets that saw the Huskies come out on top. During the fourth set, the Huskies led by one point at different times early, but Pelham then won seven consecutive points to take a 17-12 advantage.

From there, however, Helena battled back with a strong stretch to eventually even the match at 25-25. From there, the two continued stave off set points, but the Huskies were able to gather a couple of leads late and closed out the set for a 29-27 victory.

In the tiebreaker set, the Huskies continued taking advantage of the momentum early. They jumped out to a quick 5-0 lead and put Pelham in a difficult spot with no momentum.

But something clicked for the Panthers after that. Helena didn’t win another point on serve the rest of the match, while the Panthers clawed back into it.

Eventually Pelham won five points in a row to take a late lead, before then closing out the 15-11 win.

In the lengthy match, Pelham got 14 or more kills from three different players. Hannah Schmucker had 14, Elizabeth Hayhurst had 15 and Courtney Proffit had 18.

Shay Walsh led the team with 19 digs, while Tammy Melendez and Jaden Jones each had 17. Beyond that Amore Marshall and Hayhurst each added 14 digs. Walsh also added 48 assists.