From Area 51 to Africa

“I missed a lot by not having a brother and sister, but I had a lot of family,” he said. 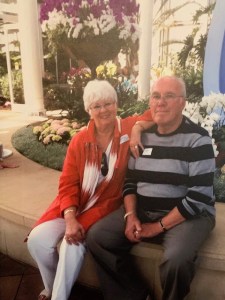 Donald and Lynn Schlick have lived an adventurous life together. (Contributed)

Don earned a Bachelor of Science degree in mining engineering from the University of Pittsburg. He went on to receive his master’s degree in public administration. He was head of the Mining Enforcement and Safety Administration (MESA).  He spent an exciting 10 years in Pakistan, during which time he recalled the work could be dangerous at times. On one specific occasion he rescued three men out of a mine after a roof collapse. Don was presented the Valor Award, the highest government safety award for his act of heroism.

Schlick authored a book entitled “Modern Oriental Carpet” while residing in Pakistan. Don’s tenure with MESA was spent in the United States where he was responsible for enforcing all of the federal safety and health regulations in all underground and surface mines. Schlick’s vocational adventures continued with a 14-year career with the U.S. Department of Energy, where he was responsible for construction health and safety at the Nevada Test Site, which is responsible for testing nuclear weapons among other things. Part of the Nevada test site is known as Area 51.

Don is a member of the Sons of the American Revolution (SAR). The society is involved in historical research, raising funds for local scholarships and educational awards, and preservation of sites and documents related to the American Revolution. The SAR petitioned Congress to store Revolutionary era documents in a fire-proof area and make them available to the public, leading to the creation of the National Archives. It is also active in cataloging and marking Revolutionary War patriot graves and conducts an annual Eagle Scout scholarship program. The society is active in promoting patriotism and was instrumental in the establishment of Constitution Day. Several SAR societies and chapters have active color guard groups that appear in various public and private venues as a means of community outreach.

Don has been married to Lynn for the past 42-years.

“Being married is like having a bank account; if you don’t have anything in it, then you don’t draw any interest,” Don said. “We do things together. Church is a very important factor in our lives.”

They have three children, four grandchildren and two great-grandchildren. The family includes the couples’ beautiful Doberman Pinscher, Bella. The couple enjoy traveling. Their most recent adventure took them all the way to Africa for a safari.