Pelham off to best start since 2006 after win at Wetumpka 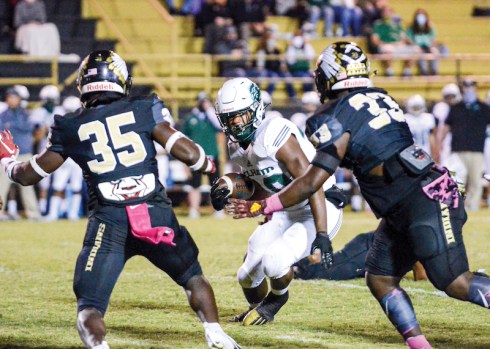 Pelham’s Dylan Peterson (20) gets surrounded by Wetumpka’s Justin Crumbaugh (35) and Lamarius Jackson (33). (For the Reporter/Caleb Turrentine) 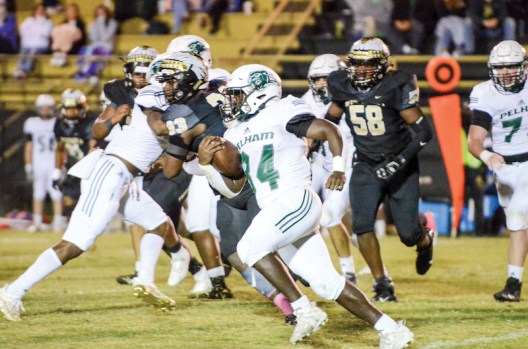 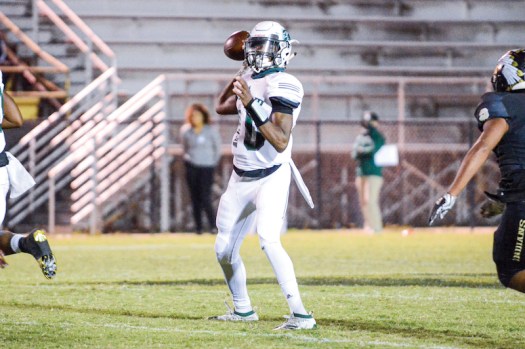 By CALEB TURRENTINE | Special to the Reporter

WETUMPKA – It was a near-perfect start for Wetumpka in Friday night’s showdown between the only remaining teams who were unbeaten in Class 6A Region 3 play entering the game. But it only took bad fortunes on three consecutive plays to turn the tide in favor of Pelham as the Panthers grabbed a hold of the momentum late in the first half and never gave it back, rolling in the second half to a 34-18 victory at Hohenberg Field.

Wetumpka (3-4, 2-1) got the game’s first points on a safety and quickly extended the lead with a touchdown pass from Robert Rose to Tavarse Murphy to take a 9-0 lead. The offense got the ball back but that’s when disaster struck.

Starting running back Stone Minnifield went down with what appeared to be a serious lower leg injury. After Minnifield was carted off the field, Wetumpka turned to the passing game but Pelham’s Fabian Calderon intercepted a pass on the first play back, setting the Panthers up inside the red zone.

“Losing Stone took a lot of wind out of us,” Wetumpka coach Tim Perry said. “We had a lot of momentum up to that point but when one of their teammates, especially a guy like Stone who gives such great effort and is a great teammate, it’s difficult. I think that affected us. Everybody is hurting right now.”

Pelham (6-1, 4-0) wasted no time with the ball as William Lankford ran 12 yards for a touchdown on the drive’s first play.

Wetumpka still held on to the lead going into halftime as Alex Londell hit a 42-yard field goal but Pelham came out of the break firing. The Panthers scored three unanswered touchdowns to start the half, quadrupling their offensive yards output from the first half in just three drives.

“I don’t think anything changed,” Pelham coach Tom Causey said. “We came out and Wetumpka was rolling but as the game went on we matched that intensity. We made some adjustments at halftime and our guys came out with a higher intensity.”

Lankford finished off Pelham’s big scoring run with a 29-yard touchdown pass to Darius Copeland. Lankford finished with 79 yards through the air and 49 yards on the ground while accounting for two scores.

Pelham relied heavily on its rushing attack with the help of running backs Gabe Gamble and Dylan Peterson. Gamble led the way with 107 yards on 11 carries including the go-ahead touchdown in the third quarter. Peterson finished with 91 yards and touchdown.

“I thought our defense did a great job in the first half, stopping their offense for the most part,” Perry said. “We just gave them too many touches in the second half. You can’t give up that many opportunities to a great team like that.”

Wetumpka’s offense struggled to answer quickly in the second half and that became the difference. After Pelham scored on the opening drive of the third quarter, Wetumpka suffered another setback with some confusion on the kickoff and it started the drive from its own 2.

After failing to gain a first down, Wetumpka was forced to punt out of its own end zone and Pelham used a short field to score two plays later.

“We were inconsistent on offense,” Perry said. “We knew we couldn’t have three-and-outs to leave our defense on the field too much so we didn’t help ourselves there.”

Wetumpka had to turn to Rose for most of its damage on offense. Rose racked up 260 yards and a pair of touchdowns through the air but without its biggest threat in the backfield, Wetumpka’s offense became more predictable.

“When their running back went down, I know it hurt them,” Causey said. “And it gave us an indicator of what they were going to do going forward a little bit. They have a great team though and they played hard for 48 minutes.”

Jaedyn Peterson became the featured back for Wetumpka, finishing with 52 yards on nine carries. Rudarius Anthony was Rose’s favorite target and racked up 110 yards and a late touchdown on seven receptions.

With the victory, Pelham moves within one win of securing its first region title since 2006.

“I feel really happy for our program,” Causey said. “Our guys have worked extremely hard. We’re not there yet though. This group understands this is a day-by-day thing.”