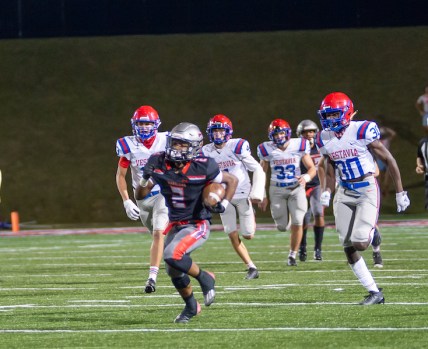 Ryan Peppins returned the opening kick for a touchdown and had 156 yards receiving to lead the Warriors to a 38-9 win over Vestavia Hills on Friday night. (For the Reporter/Larry Dancy) 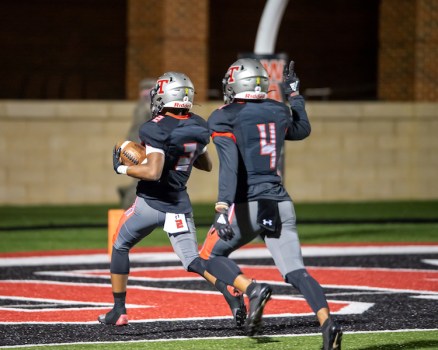 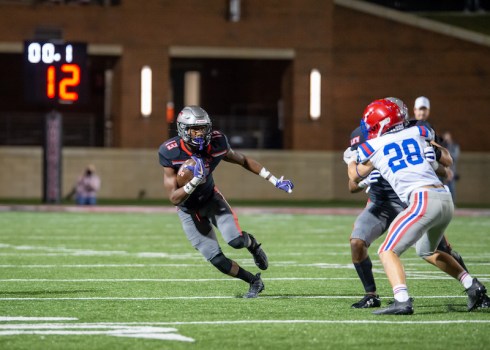 Thompson receiver J.B. Mitchell will represent the Warriors in the Alabama-Mississippi All-Star game after recently being announced to the Alabama team. (File) 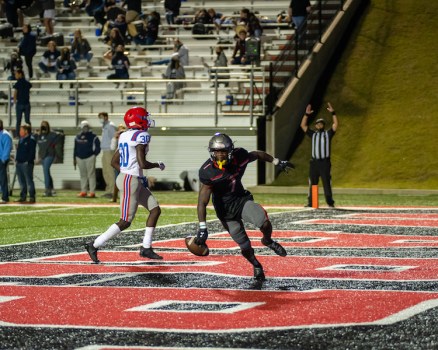 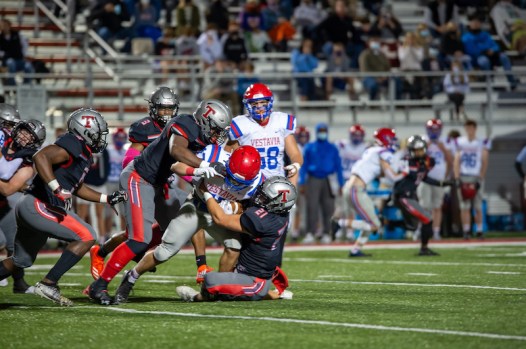 ALABASTER ­– Thompson’s high-powered offense dominated early and late Friday’s 38-9 win over Vestavia Hills as the top-ranked Warriors (7-0 overall and 4-0 in Class 7A, Region 3) extended their winning streak to 11 games.

Ryan Peppins ran back the opening kickoff for a touchdown—the start of a big night for the junior receiver—and Thompson built a 24-0 lead before the visiting Rebels (1-5, 1-3) entered Warrior territory.

A tackle by Thompson’s Trevor Hardy forced a punt on Vestavia’s first possession, and then the Warriors marched right down the field with four first downs in four plays, including a scramble by junior quarterback Conner Harrell that ended with a long completion to J.B. Mitchell III.

The drive was capped by a touchdown run from Mitchell.

Thompson’s Tony Mitchell made a defensive stop in the visitors’ backfield to force a punt on their next possession, and the Warriors led 21-0 with 1:24 on the clock in the first quarter with Harrell’s 30-yard touchdown pass to Peppins, who made an impressive over-the-shoulder catch.

After another VHHS punt, Thompson threatened to extend its lead thanks in part to a pass from Harrell to Peppins on a fourth-and-5 inside Vestavia territory, but the Warriors ended up settling for a field goal by Trevor Hardy and a 24-0 edge with 4:20 remaining in the first half.

Desperately needing a score, the Rebels began to build some offensive momentum behind a powerful running game and play-action passes.

A leaping grab by Cole Turner on a throw from Braden Glenn got Vestavia inside Thompson territory for the first time of the night, and on the next play Bryant Agee found the end zone on a toss to the right.

VHHS carried the momentum into the second half. Their first possession of the third quarter ended with a 31-yard field goal by Matthew McMeans that cut the deficit to 24-9.

After a Thompson three-and-out, Vestavia continued to march, picking up 13 first downs in its last three possessions, but the Rebels were denied points at the start of the fourth quarter as the Thompson defense held on a fourth down run from the 2-yard line.

The Warriors put the game away from there.

Harrell connected with Tre Roberson and Peppins for a 39-yard touchdown pass to make it 31-9.

After a Vestavia punt, Sam Reynolds ran in the game’s last touchdown, from 26 yards out.

Thompson’s Brandon Holifield broke up a fourth-down pass by Vestavia deep in Warrior territory with time winding down.

Peppins was his favorite target with nine catches for 156 yards.

Mitchell added 77 yards on five receptions, and Roberson had three catches for 63 yards.

Thompson has now won five straight and seven of its last eight against Vestavia, though the Rebels still lead the all-time series, 14-11.