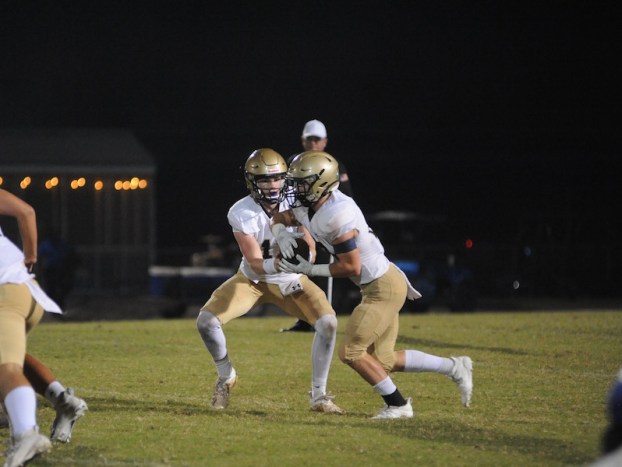 Briarwood's offense was rolling in a 42-19 victory against Shades Valley on Friday night, Oct. 2. (File)

Briarwood pulls away from Shades Valley for region win

IRONDALE – Briarwood’s balanced attack offensively and continued success defensively was too much for Shades Valley on Friday, Oct. 2, as the Lions pulled away for a 42-19 win on the road to improve to 6-1 on the season.

“Our offense played really well. It was a great bounce back game for them,” Briarwood head coach Matthew Forester said. “I’m very proud of the way they prepared this week at practice just focusing on the little things. Shades Valley is a really good team even if their record doesn’t show it since they played an extremely tough schedule.”

The Mounties got a chance early as they received the opening kickoff. While the Mounties weren’t able to run between the tackles thanks to Briarwood’s strong defensive front, quarterback Earl Woods was able to keep the ball himself for incremental gains.

Woods was able to convert multiple fourth down plays by running the ball around the edge. Because of Woods’ excellent play, Shades Valley was able to cap off an opening drive that lasted almost a full seven minutes with a touchdown.

Once Briarwood’s offense was able to gain possession of the ball, however, the Lions didn’t waste any time responding with a scoring drive of their own.

On the return, Nic Dicen was able to weave through three Mountie defenders before finally being tackled on the Shades Valley 45-yard line. Two plays later, sophomore quarterback Christopher Vizzina found Bailey Salmon wide open on the hash to quickly tie the game at 7-7.

On the next drive for each team, the two defenses traded forced turnovers.

But once Shades Valley got the ball back again, the found success on one of their only truly explosive drives of the night. Woods was able to roll out of the pocket to find Alfonso Weathers for a nice gain into Lion territory.

On the very next play, Woods rolled out of the pocket, this time to his left, before finding Weathers open in the end zone for a 40-yard touchdown pass. The extra point was blocked, but the Mounties had the lead.

But it was short lived, and they would soon lose it for good.

On the ensuing drive, Vizzina once again carried the Lions down the field. He was able to rush for 40 yards on a well-read option play before hurrying to the line to execute a perfect pass to Dicen.

After a Briarwood timeout, Vizzina got plenty of time in the pocket before finding Brooks Donnelly in triple coverage. The throw threaded the needle, and the extra point put Briarwood up by one with 18 seconds left in the first half.

On the kickoff return, Disaster struck for Shades Valley. The football took a precarious bounce through the hands of the deep returner for the Mounties. Once he reached the ball, there were at least three Lions on his tail.

A dogpile ensued on the Mounties’ 16-yard line where Briarwood came out with the ball. On the next offensive play, Donnelly made them pay with a diving catch in the end zone to give his team a 21-13 lead at halftime.

Briarwood received the second half kickoff and didn’t waste time expanding the lead. On the second play of the drive, Luke Reebals took the ball through a hole made by his offensive line. The junior running back then went 78 yards untouched for another score.

Reebals finished with more than 200 yards on the ground in the win.

The Briarwood defense tightened up in the second half as well. They were able to stop Shades Valley multiple times on fourth down and limited the talented Mounties’ receiving corps to no touchdowns in the half. The defense was also able to force two interceptions to end critical Shades Valley drives.

“If the ball is loose on the ground, we’re going to try to get after it,” Forester said. “The turnovers and the interceptions. Haddon Stubbs and Seth Alford they did a great job playing their coverages and just making a great play on the ball. I’m really proud of them.”

The Lions scored two more times in the second half to put the game out of reach. One came through the air, while Brooks Donnelly was able to punch the other in on the ground.

The Lions improved to 6-1 overall and 4-0 in region play with a showdown against Mountain Brook on Oct. 9.

By ANDREW SIMONSON | Special to the Reporter WEST BLOCTON – In a contest dominated by the ground game, it... read more