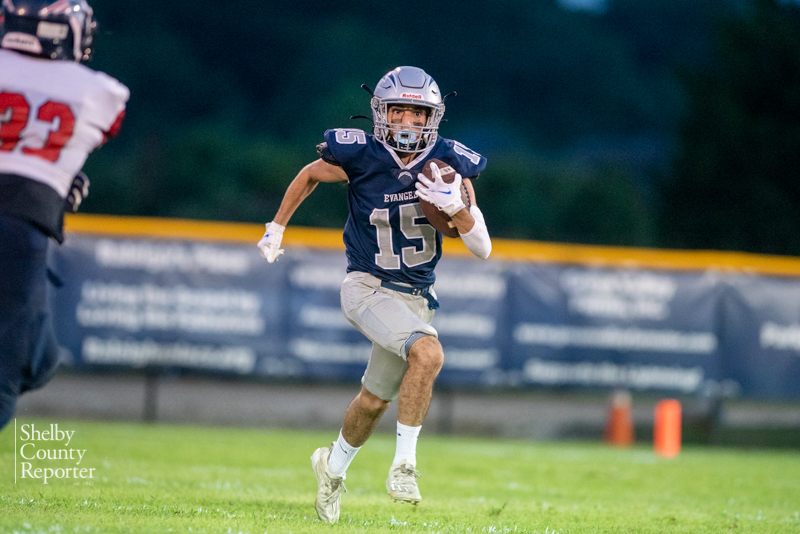 ALABASTER – Evangel Christian School could not overcome an early 27-0 hole Oct. 2, falling at home to Ezekiel Academy, 65-34, in 8-man football.

The loss, Evangel’s first as the home team since 2017, snapped a 13-game win streak.

“It tells us we’ve got to back to work. All streaks end sooner or later. We hated to lose, but man our kids fought so hard in the second half. They fought their tail off to get back in the game and had a chance to tie it. We’ll get back to work Monday,” said ECS Coach Tim Smith.

A high snap on the first play of the game was recovered and returned for a touchdown by Ezekiel and the Knights didn’t look back. Trailing 27-0 in the second quarter, Jett Lodge scored on a 20-yard run to put Evangel on the board. Lucas Mast added the extra point to make it a 20-point game, 27-7. Ezekiel answered late in the quarter with a 40-yard touchdown to make it 35-7 at the half.

Lodge took over the game for Evangel, collecting 424 all-purpose yards. The senior wide receiver moved to quarterback in the second half and led Evangel on a 21-point run to make it 35-28. First, Lodge ran one in from 28 yards, before connecting on touchdown passes to Bradley Davis of 35 and 3 yards. Davis finished the game with 85 yards on four catches. Lodge added a two-point conversion on the second touchdown of the half and Mast kicked the extra point on the third.

Trailing by a touchdown, ECS held Ezekiel, but threw an interception on a trick play late.

“That kind of took the wind out of our sails,” Smith said.

The Lightning looked to hold again, but a face mask penalty on third down extended the Knight’s drive and led to a touchdown on the final play of the third quarter.

Ezekiel scored twice more early in the fourth quarter before a 68-yard touchdown run by Lodge, and then added another touchdown with 1:30 to play.

“It may sound odd, but our defense played well,” Smith said. “Evangel scooped and scored and had some big plays, but they only had two drives the went down the field with us. We held our own with them. Their quarterback and running back are really good. They were the difference.”

Lodge carried the ball 14 times for 156 yards and completed 4-of-9 passes for 89 yards and an interception. He scored two touchdowns on the ground and threw for two. Prior to the move to QB, he also had 12 receiving yards to rack up 254 yards of total offense. He added 105 yards on four kick returns and 74 yards on a pair of punt returns in the game. Defensively, he led ECS with 15 tackles.

Starting quarterback Eli Whitfield threw for 47 yards on 6-of-11 passing and an interception before exiting the game in the second quarter with a leg injury.

Timothy Howard followed Lodge’s lead on defense with 11 tackles at linebacker. He also had four catches for 39 yards on offense. Dylan Weathers and Daniel Viles added 10 and eight tackles, respectively.

The win gives Ezekiel (7-0, 1-0 ACSC) the lead in the Alabama Christian Sports Conference standings before hosting Lighthouse Homeschool (3-1, 0-1) on Oct. 23. ECS is now 1-1 in ACSC action.