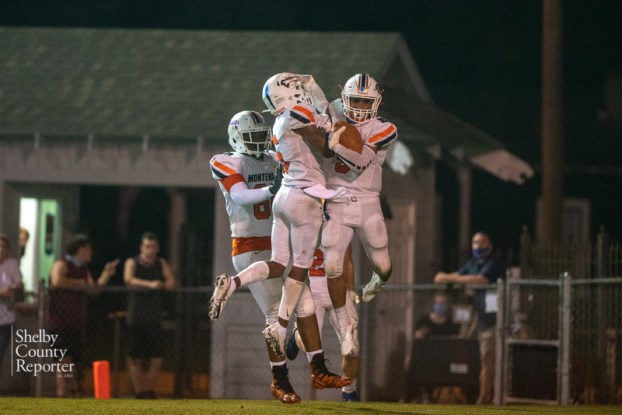 The Montevallo Bulldogs pulled off a thrilling one-point win against West Blocton on Friday, Oct. 2, thanks to a last-second field goal from Gio Hernandez. (File)

WEST BLOCTON – In a contest dominated by the ground game, it was special teams that decided Montevallo’s win against West Blocton on Friday, Oct. 2.

In Montevallo’s first game in 21 days, the Bulldogs fought to a wild 29-28 victory against the Tigers thanks a last-second field goal from Gio Hernandez set up by a battle of the running backs.

“It was one of the more physical games we’ve been involved in,” Montevallo head coach Blake Boren said postgame. “I mean, I think they threw one pass. You know, we’re a team that prides ourselves on running the ball real well, and it was a bloody mess out there, and it really was. It just beat you up and bang you up, but that’s what you expect when you play this style of football. They do an unbelievable job at West Blocton. They build their program around tough kids and that style of play, so I thought our kids responded well and played as physical as they needed to be to be successful in the second half.”

West Blocton got off to a fast start on offense, opening with two touchdown runs by fullback Jaxson Lightsey in-between a Montevallo fumble and mishandled punt snap.

It looked like the Tigers were poised to dominate until a fumble immediately after the punt fiasco gave the Bulldogs the ball back.

From there, the Bulldogs marched 75 yards down the field for their first score of the game—a run by running back Joseph Anderson, to make the score 14-6 Tigers following a mishandled hold on the extra point attempt.

In the second half, both offenses roared to life, including the Montevallo passing game, which overcame penalties in the drive for a 21-yard touchdown pass from quarterback Jay Dreyer to receiver Michael Jones to tie the game at 14 following the 2-point conversion.

Lightsey, however, notched his third and fourth rushing touchdowns of the game afterwards, and in between those scores was another touchdown run from Anderson for the Bulldogs.

With the score 28-20 Tigers early in the fourth, the teams traded punts before Dreyer and Jones linked up again for a second receiving score. The ensuing 2-point try failed, leaving Montevallo just two points short and giving the ball to West Blocton with five minutes to play.

And then, pandemonium ensued.

A Bulldogs’ stop set up a Tigers’ punt that only traveled 6 yards, setting the Montevallo up on the West Blocton 44-yard line with 3:52 to go in the game.

From there, went on a 12-play, 42-yard drive that was saved by a defensive pass interference on third-and-10. The Bulldogs also got a fourth-down conversion on the 22-yard line to receiver Jeremy Holsomback, as well as two runs at the goal line with no timeouts left in an attempt to run the clock and score last.

With 12 seconds to go and counting, Hernandez rushed onto the field to try a 15-yard field goal. A quick snap hit freshman holder Braxton King in the ribs, but he handled it well and set up the converted soccer player to send in a low kick through the uprights as time expired for the 29-28 win.

After the team rushed the field to celebrate, hoisting Hernandez on their shoulders, Boren said he was grateful for another win to hopefully send the Bulldogs to the playoffs in his first season.

“It’s a big deal,” he said. “Obviously for us it has major playoff implications. You know, right now we’re 3-2 in the region and we’ve got two more region games to go, but we really felt like the winner of this game would have a chance to play on, and I’m just super proud of our kids. Our back was against the wall all night, we didn’t play very well early, but I think part of that was because we’ve been dealing with cancelled games and all that.”

Kavounte Britton and Cole Dennis combined for 22 tackles in the win.