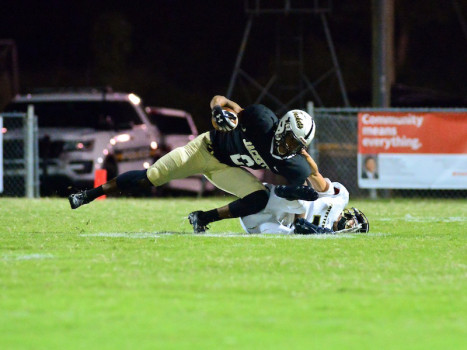 Vincent scores first but can’t keep up with Lanett

VINCENT – After winning two of the last three 2A state titles, the Lanett Panthers have built up a program that has sustained plenty of recent success, and the Panthers are off to another strong start in 2020 as they remained unbeaten in region play with a big 50-7 road win over Vincent on Friday, Oct. 2.

The task to defeat Lanett was a tall one for Vincent, but the Yellow Jackets started the game about as well as they could have asked to as quarterback Will Harris found Tae McGregor for a 65-yard touchdown on the first play of the game to give Vincent an early 7-0 lead.

However, after the big opening play, Vincent struggled with miscues and defensively had a difficult time keeping the Panthers off the scoreboard as they held a 36-7 halftime lead before eventually getting the 43-point win.

“Our guys played hard and my first couple years it’s been a culture change and they fought hard tonight,” Vincent head coach Lucas Weatherford said. “We went toe-to-toe with them initially and we were in the game there and if we don’t make mistakes it’s a closer ballgame. We have a big game with Randolph County next week and three tough region games left. I feel good about how we’ve been competing.”

Jermarey Lawson carried the ball 17 times for 65 yards for the Yellow Jackets, while McGregor had two catches for 86 yards and one touchdown. Harris got injured in the second quarter and only finished 2-of-3 for 75 yards.

On this week’s show, we talk about all of the crucial matchups taking place this Friday as team’s jump back... read more