ALABASTER – When Gary Yarbrough walks into Shelby Baptist Medical Center for work each morning, he knows his role and what he needs to accomplish throughout the day.

As lead chaplain for the hospital’s Pastoral Care Team, Yarbrough is in charge of coordinating and implementing a plan of pastoral care for patients and their families, visitors and staff. In short, he provides spiritual and emotional support to countless people, many of whom are battling health issues.

It is a huge job, but Yarbrough, 68, embraces his role as a provider of comfort and compassion in challenging situations. He never thought he would have to change roles, from that of provider to patient, until a normal day at work turned frightening. 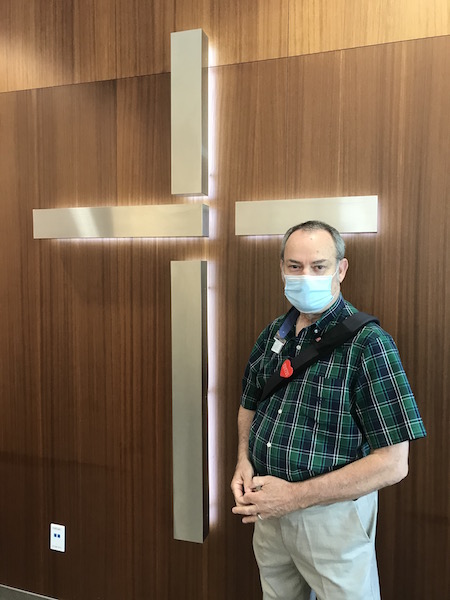 Gary Yarbrough, lead chaplain for Shelby Baptist Medical Center’s Pastoral Care Team, was carrying out his normal duties at work when he started experiencing symptoms he later learned were related to a heart attack. (Contributed)

“It started just like any other day – arriving at the hospital, checking the census, prioritizing referrals, attending the daily multidisciplinary team huddle and making rounds,” Yarbrough said. “About mid-morning, I realized I wasn’t feeling well, but didn’t pay much attention to it; a mild discomfort.”

Yarbrough carried on with his duties, meeting with Clinical Chaplain Victor Lewis at noon to talk about some of the changes occurring as a result of the hospital system’s response to the novel coronavirus pandemic.

“During our conversation, I began to feel worse and made a mental note, ‘After I meet with Victor, I’ll go back to my office,’” he said. “Maybe this feeling will subside, and if not, I’ll go and see the doctor after I get off work.”

Back in his office, Yarbrough called his wife, Ramona, to tell her he wasn’t feeling well and planned to see the doctor. He didn’t think it was COVID-19 because his symptoms didn’t seem to match those commonly associated with the virus.

Meanwhile, his discomfort continued to increase.

“I couldn’t get in a comfortable position, neither standing nor sitting,” Yarbrough said. “As I stood in the middle of the office, I had a crisis self-revelation: ‘If I don’t do something about this now, then someone is going to walk into this room and find me on the floor passed out or dead. I can’t let anyone find me like that!’”

Yarbrough remembers calling the doctor’s office and leaving a message, going to see the employee health nurse, being taken to the emergency department and then being escorted to the trauma room.

“After a few minutes being hooked up to a monitor, I heard the nurse call out to another, ‘Call a Code STEMI,’” Yarbrough said. “Translation: ‘This guy is having a heart attack NOW.’ Within minutes, I was having an emergent heart cath – 100-percent blockage in the circumflex artery and now the proud owner of a brand-new stent.”

Dr. Nirman Bhatia performed Yarbrough’s heart catheterization procedure, and Dr. Neeraj Mehta, one of Bhatia’s colleagues at Heart South Cardiovascular Group, was the first to see Yarbrough in the emergency room during his rounds that day.

Mehta said Yarbrough’s blockage was in one of the larger arteries in his heart, meaning the stent was crucial in opening up the artery and allowing blood to flow through it properly.

“This was at a stage that, if the blood supply is not restored, it could possibly be fatal,” Mehta said. “Less than an hour after we found (the blockage), we had his artery open. He had no long-term permanent heart muscle damage.”

Yarbrough later realized he had been experiencing classic symptoms of a heart attack, including tightness in the chest, aching in the arms and lightheadedness.

Shortness of breath is also a common symptom of a heart issue, Mehta said.

Mehta said the gradual worsening of symptoms Yarbrough experienced is not uncommon, but the key is to not delay seeking medical attention.

“He works in the hospital setting, so he had an advantage because it was easy for him to seek care,” Mehta said. “The sooner people seek medical attention, the better they tend to do. We encourage people to not ignore symptoms.”

But symptoms of a heart attack are not limited to chest pains and shortness of breath, especially for women, Mehta said.

“Women tend to have atypical symptoms,” he explained. “That’s why they tend to get missed more often. They feel they have reflux or nausea, and it’s actually a heart attack. They don’t always recognize their symptoms.”

Women in the post-menopause stage tend to be at a higher risk for heart problems because of hormone changes, Mehta added. As such, a more aggressive approach is being taken to screen women in this category and watch for potential issues.

Following his stent procedure, Yarbrough took his time at home recovering on all levels – physically, emotionally and mentally.

“That may sound strange for a chaplain to say, but those first few days turned to weeks of adjusting medications, developing a daily exercise regimen (and, sticking to it), developing and maintaining a heart healthy diet, and checking my blood pressure twice a day and documenting it,” Yarbrough said. “I knew I would not be able to do all this if I returned to work too soon. I was also trying to follow my own advice without feeling guilty: ‘Healthy self-care is not selfish.’”

Yarbrough calls his recovery a “personal transformative process,” a restart entailing life-altering changes. He began documenting his blood pressure daily and keeping notes about how he was feeling throughout the first month after his heart attack, making his follow-up visits with Mehta even more helpful as they evaluated his progress.

“I think patients taking that initiative upon the doctor’s advice tend to stay more involved,” Mehta said. “Getting those valuable readings from their normal environments give us a good idea of how they’re doing on a daily basis.”

Yarbrough’s story doubles as a cautionary tale – a reminder of the importance of seeking treatment for serious ailments, even during the uncertain times of the COVID-19 pandemic.

“The most important thing about seeking immediate medical attention is simply to pay attention to what your body is telling you,” Yarbrough said. “I almost waited too late. My symptoms went from mild discomfort to chest and arm pain and lightheadedness in a couple of hours. I only sought help when I knew that I was about to pass out.”

“In a large portion of patients, their first brush with heart disease might possibly be fatal,” he said. “I think seeking prompt attention from a primary care doctor or cardiologist or anyone they have access to is very important.”

The healthcare industry has seen a recent upward trend in people avoiding emergency medical treatment during the pandemic, a problem that’s troubling to healthcare professionals like Mehta.

“I think being concerned and having a little bit of fear is very understandable, but as we’re learning more about the coronavirus, it has become evident to us it is not going away,” he said. “We should not ignore our other needs.”

The problem is so widespread that the American Heart Association has launched a “Don’t Die of Doubt” campaign to encourage people to call 911 if they think they are having a heart attack or stroke.

The campaign also seeks to dispel myths and misconceptions about seeking emergency care during the pandemic. More information can be found at Heart.org/en/health-topics/dont-die-of-doubt.

Mehta said his office is following all CDC guidelines and procedures to mitigate the spread of the virus. In addition, telemedicine has become a popular alternative to regular office visits for patients who are anxious about coming in and who do not require in-person services.

“If something is going on, they can get the care they deserve and they truly need,” he said. “I think omitting basic care and ignoring their symptoms could get them into bigger trouble.”

Since his heart attack, Yarbrough said he has become more diligent about maintaining good health by taking medications daily, exercising regularly, checking his blood pressure every night and following a heart-healthy diet with low sodium and low carbs and sugar.

“I must admit, there are times it’s not easy,” he said. “I sometimes crave the usual ‘comfort foods.’ I’m also not always up to the evening exercise-bike ride after work and dinner. But the takeaway? I am feeling physically better than I have in a long time.”

Yarbrough also has a new lens through which he sees his purpose as a chaplain—and a survivor.

“I always thought I had a unique way of seeing and experiencing life; having an awareness of God’s presence in the midst of all that we go through,” he said. “Since the heart attack, that awareness has risen, and I do believe that I may still be here if for no other reason than to encourage you to do whatever is necessary for you to take care of yourself.”

Yarbrough expressed gratitude for the doctors and nurses who helped him survive and recover from his heart attack so he could return to his role as a chaplain.

“In the world of healthcare, we are all extended family. We work together for the good of the patient,” he said. “This time, it just so happened that I was the patient. On that day, I got to meet other members of the Shelby Baptist Medical Center’s family up close and personal. They know who they are and how much I am grateful to each of them.”

FROM STAFF REPORTS  COLUMBIANA — A Pelham man’s bond was revoked at the request of the Shelby County Drug Enforcement... read more