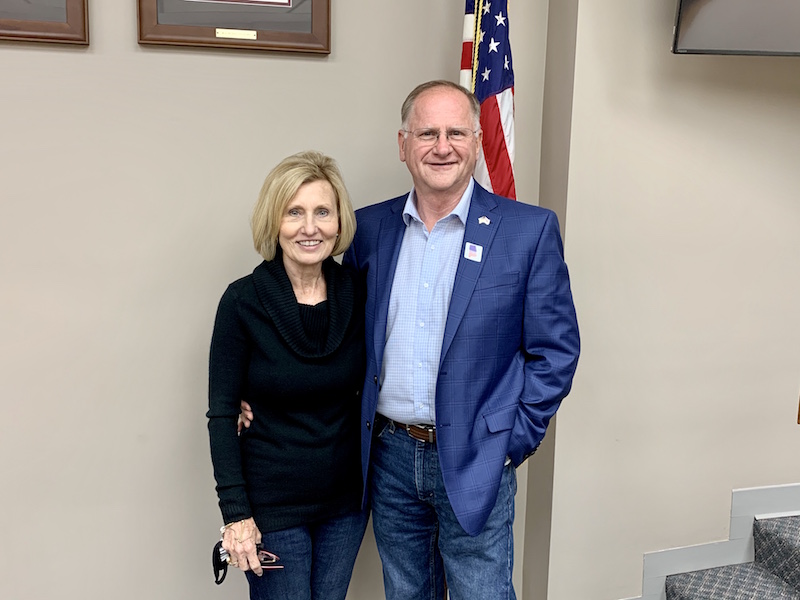 David Mitchell stands with his wife, Kathy, after finding out he won the runoff election for mayor of Columbiana on Tuesday, Oct. 6. (Reporter Photo/Emily Sparacino)

COLUMBIANA – David Mitchell will serve as Columbiana’s next mayor after he defeated challenger Teresa Whiting in an Oct. 6 runoff election.

“I’m very appreciative for the voters of this city having the faith and confidence in me to do this job, and as I said earlier, now I have to live up to that faith and confidence, and I hope that I can do that,” Mitchell said. “I’m very proud, and I think it’s going to take a day or so for it to sink in and the responsibility that goes along with it. I just hope to be able to be the best mayor I can possibly be for Columbiana.”

During his first term on the Columbiana City Council, Mitchell said he will focus on sustained and manageable economic growth, being a good steward of the city’s financial resources and emphasizing transparency, communication and collaboration among city leaders and residents.

Mitchell commended Whiting for her campaign and said she would have been a great mayor.

“It’s an honor to have been in the race for mayor of Columbiana,” Whiting said. “I’m thankful for the ones that supported me and put their trust in me. I love this city. My love for the city and commitment to the city will not change. I’m blessed.”

Mitchell and Whiting entered the runoff election after neither candidate was able to gain the majority of the vote in the August municipal election. In the municipal election, Whiting received 270 votes (31 percent) and Mitchell received 250 votes (28.7 percent), beating out the other three mayoral candidates, Jerry Bice, Susan Conn and Lamar Vick.

Mitchell will serve for the next four years alongside incumbent council members Kim King and Ricky Ruston and newcomers Vickie Mizzell, Ashley Phillips and Karen Lilly.