He is a member of the Support Committee for the Alabama National Cemetery and assists with all ALNC ceremonies.

For larger ceremonies, his duties include setting up the Avenue of Flags, setting up chairs, transporting gravesite flags to all sections, parking and cleaning up. 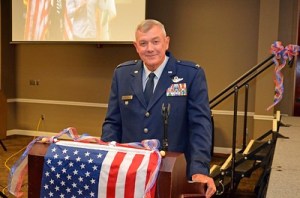 Eldon Woodie serves as a member of the Support Committee for the Alabama National Cemetery, a volunteer with the National Missing In America Project and is a member of American Legion Matthew Blount Post 555. (Contributed)

He pulled the SCALNC float for the Birmingham Veterans Day Parade and Montevallo Parade.

Woodie is a member of the Matthew Blount Post #555 of the American Legion and supports Post activities.

He serves as co-chair for the team and is active in raising funds to support for Wreaths Across America at the ALNC.

Woodie is a volunteer with the National Missing In America Project.

Currently, he is the only volunteer for MIAP in the state of Alabama.

The intent of MIAP is to locate, identify and inter the unclaimed remains of American veterans through joint efforts of private, state and federal organizations; to provide honor and respect to those who have served this country by securing a final resting place for the forgotten heroes.

Following in the footsteps of his grandfather and father, Woodie carved a long and successful military career.

His son and son-in-law are also in the military.

Woodie spent a year in Korea. He received an honorable discharge in 1977.

He served in the United States Air Force for 27 years, making 3,000 flies over nearly 30 years.

“The Air Force was very good for me. I got to see and do things I never would have,” the 63-year-old said proudly. “It was a long and rich career.”

He was a Jr. ROTC Instructor at Thompson High School for four years.

For five years he served as a cemetery director over five cemeteries, and he retired in 2019.

Woodie holds several college degrees including a B.S. in criminal justice, master’s in business administration and master’s degree in history.

He has been married to Bonnie for the past 44 years. They met through the military where she held an administrative position in the same M.P. Company unit.

“The best decision in my life was marrying my wife and the second was joining the military,” Woodie said.

The couple are the proud parents of two children and five grandchildren.