PELHAM – The Pelham City Council unanimously approved the appointment of Mike Reid as the city’s fire chief during an Oct. 5 meeting.

Reid will fill the position previously held by Tim Honeycutt, who retired after serving the city for more than 26 years and as fire chief for the last three-and-a-half years.

“I am truly humbled and honored to be selected and be given this appointment,” Reid said during the meeting. “I do not take it lightly. This is a position that I’ve dreamed about for a long time.” 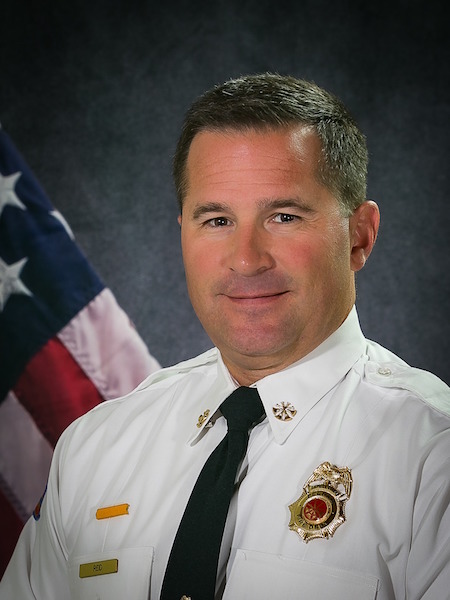 Mike Reid was appointed as Pelham’s next fire chief at a Pelham City Council meeting on Monday, Oct. 5. (Contributed)

Reid said his family is heavily involved in the fire service, noting his father has served the city of Montevallo for more than 50 years, 22 of which he spent as the city’s fire chief.

“Even though this is a dream of mine, this is not my finish line because we have lots of work to do,” Reid said. “We can make plenty of recruitments and serve our citizens through training and community outreach. I’m excited to begin this journey with the Pelham firefighters and paramedics of our department and, most importantly, to serve our citizens of Pelham.”

Pelham Mayor Gary Waters said he was a part of the final interview panel for the selection of the next fire chief that included Pelham City Manager Gretchen DiFante, Bessemer Fire Chief Randall McFarland and Hoover City Administrator Allan Rice.

“The process that Chief Reid participated in from the beginning to the end was very rigorous, very comprehensive and very fair,” Waters said. “He was found to be more than capable of becoming Pelham’s next chief, and I’m elated to make this recommendation to you.”

Added DiFante, “I’ve never seen so many people behind a leader in an organization. Mike, that says a lot about you, and I think that’s admirable. I really appreciate your leadership.”