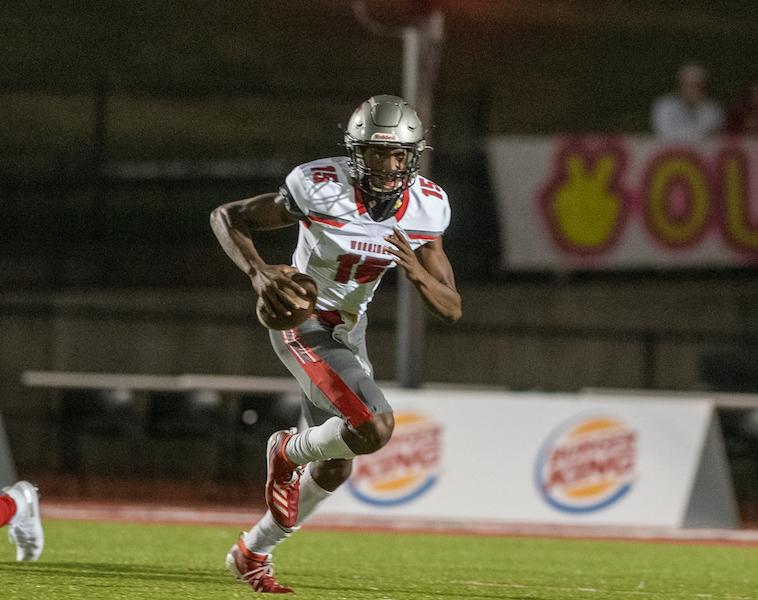 GADSDEN – The Thompson Warriors posted their second shutout of the year and their first on the road in their first ever trip to new Class 7A Region 3 member Gadsden City on Thursday, Oct 8.

THS went up big at the half 34-0 and milked the clock from there en route to a 48-0 final for Thompson’s 12th win in a row dating back to last year.

The defense played well from the outset and forced a three and out to open the game. Ahmari Bolden started the game at running back for the Warriors and busted a 20-yard run to begin the drive.

From there Conner Harrell found J.B. Mitchell a couple of times and zipped a short pass to the senior for the game’s first score.

The Titans’ offense sputtered at midfield of their next drive and the Harrell-Mitchell show continued. The two hooked up for their second score with 20 seconds remaining as Harrell fit a pass into a tight window throwing across his body to give the Warriors a 13-0 lead.

The next score didn’t come from either offense, as the Thompson rush forced Gadsden City quarterback Brady Troup into a bad pass. Thompson sophomore safety Tony Mitchell snagged at midfield and, cutting back to the right, avoided several tacklers and took it all the way to the house for Thompson’s first pick six of the season.

Mitchell chose to put on an encore performance on the ensuing Titan drive as Gadsden City threatened deep in Thompson territory.

With Troup out due to an injury, quarterback Demarcus Macon gave the Titans a spark moving them down the field. However, looking for one of his receivers in the end zone, Mitchell saw the play coming again and effortlessly stepped in for his second pick of the night.

The Warriors took the ensuing drive the distance again with Harrell finding Mitchell for a third time in the first half for a 27-0 lead.

Mitchell was unconscious, grabbing a team and season-high 10 passes for 144 yards all before halftime.

Harrell tacked on another touchdown with nine seconds to go, floating a pass to Sam Reynolds who located the ball and cradled it as he rolled into the end zone for the 34-0 lead.

Harrell was stellar in the first half once again hitting 20-of-27 passes for 262 yards and four touchdowns. He added one more for good measure on the first drive of the third quarter as Sam Reynolds’ big kickoff return started the Warriors off in Titan territory.

Another big run from Bolden got them in the red zone, and Harrell took it from there, lofting a perfect ball to Tre Roberson on the left corner of the end zone to leave no doubt.

Gadsden City fumbled on its own 12-yard line later in the quarter to set up Thompson with an easy touchdown, as Bolden took it in from the 2-yard line.

Bolden finished the night leading all rushers with 88 yards on 11 carries and his first touchdown of the year. Mitchell nearly set a career mark in yards for a second time this season and led all players with 155 yards on a career-high 11 receptions and three touchdowns.

Thompson (8-0, 5-0) will finish their slate against the other top seeds in Region 3 at Oak Mountain next week and rounding out the regular season with Hoover at home.

Marbury too much for Shelby County