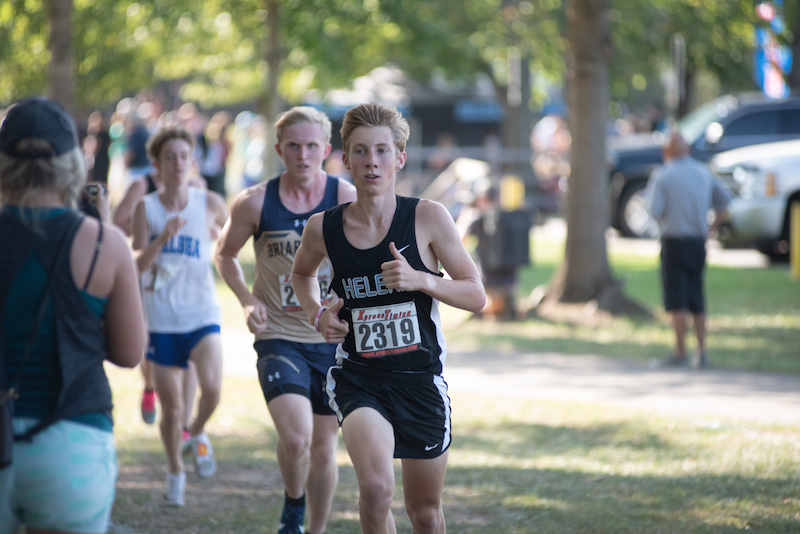 Helena’s Brady Barton put together a strong showing at a home event for the Huskies on Oct. 10 thanks to his finish of third. (File)

HELENA – Just a few days after competing in the Shelby County Championship, Helena hosted some of the state’s best cross country teams at the 2020 edition of the Helena Invitational on Saturday, Oct. 10, including several local schools.

For the boys, Helena’s Brady Barton as well as Spain Park’s Keith Warner and Kenneth Bishop were highlights after picking up top 10 finishes in a field featuring 152 of the state’s best runners.

Barton claimed his third top-three finish of the year after finishing first two times early in the season, while he has yet to finish lower than 13th and has finished in the top 10 in four of his five races. He finished the race with a time of 16:24.79.

Warner also continued a special season for the Jaguars by claiming fifth in the meet after picking up his first career win two weeks earlier. He found the top five thanks to a time of 16:45.46.

Bishop also had one of his best races of the season with his second fastest event this year. He finished the event with a time of 17:15.08 to claim ninth in the event.

Thompson’s Jackson Hamlin was the next highest local finisher outside of the top 10, claiming 13th behind a time of 17:24.89.

Spain Park had another two runners finish inside the top 25 with Garrett Bishop taking home 16th thanks to a time of 17:38.73 and Jackson Cooper finishing 22nd with a time of 17:48.14.

Behind those two, Thompson added two more inside the top 30. Cameron Prosser finished 26th for the Warriors after crossing the line in a time of 17:53.36, while Jacob Cofield finished 30th with a time of 18:03.13.

In the girls race, Spain Park’s Mackenzie Culpepper was the only runner from the county to finish inside the top 10, claiming 10th on the spot with a time of 20:52.58.

Just a few spots behind her was Oak Mountain freshman Lauren Cole, who finished 13th thanks to a speedy time of 21:11.75.

Teammates Emma Grace Phillips and Lexi Ray also had impressive performances with Phillps finishing the race in 21:37.20 to claim 21st in the event and Ray running it in 21:42.03 to finish one spot lower in 22nd.

Spain Park’s Peyton LeCroy joined Culpepper with a strong showing thanks to her finish of 19th behind a time of 21:31.08.

Helena also added one finisher inside the top 30 thanks to the always steady Mallory Barton, who finished 28th behind a time of 21:58.58.

Indian Springs’ Elise Picard was the only other runner to finish in the top 30 locally thanks to finding the 24th position after running the race in a time of 21:46.69.

Thompson and Pelham each had finishers inside the top 50 with Lauren Moon finishing 40th for the Warriors, while Brooke Monti and Zitaly Pacheco finished 42nd and 43rd, respectively, for the Panthers.