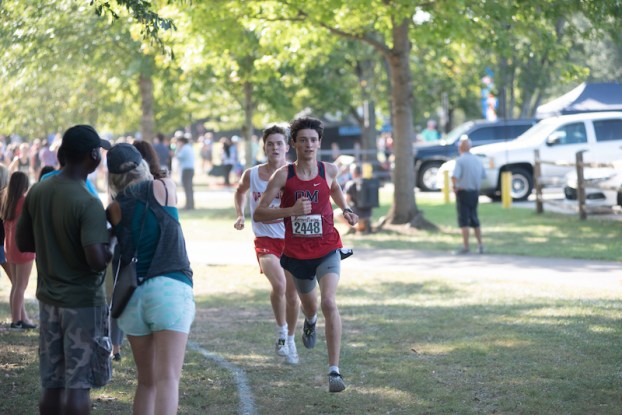 ALABASTER – With five runners finishing inside the top 10 of the standings at the 2020 Shelby County Cross Country Championship, the Oak Mountain Eagles not only made up half of the top 10 runners, but took home first in the team standings at the meet held at Alabaster’s Veterans Park on Tuesday, Oct. 6.

The Eagles were led by the top two finishers in the race with Walker Cole and Hunter Wright continuing impressive seasons. Cole won his third race of the season thanks to a time of 16:02.96 and has yet to finish any lower than third in five events.

For Wright, it marked his second top-five finish of the season thanks to a time of 16:12.60 and came just a few days after setting a personal record of 15:55.20.

Reese Bell added another top-five finish for the Eagles thanks to finishing the event with a time of 17:23.49, which was good enough for fourth place.

A big reason for the success of the Huskies was Brady Barton, who continues to have a strong senior season for Helena. He finished third in the event with a time of 16:52.28.

Briarwood also two top 10 finishers with Joseph Bell and Patrick Hnizdil continuing impressive seasons. Bell finished ninth behind a time of 17:54.80, while Hnizdil finished 10th with a time of 18:10.33.

The Thompson Warriors also had a few high finishes with Jackson Hamlin highlighting the team thanks to his sixth-place finish behind a time of 17:27.56.

Pelham was highlighted by Ian Howell with a finish of 33rd thanks to a time of 19:40.86. Teammate Thomas Gennari finished 50th.

By CHRIS MEGGINSON | Special to the Reporter WEDOWEE – Coming off a 43-point loss to No. 5 Lanett, the... read more