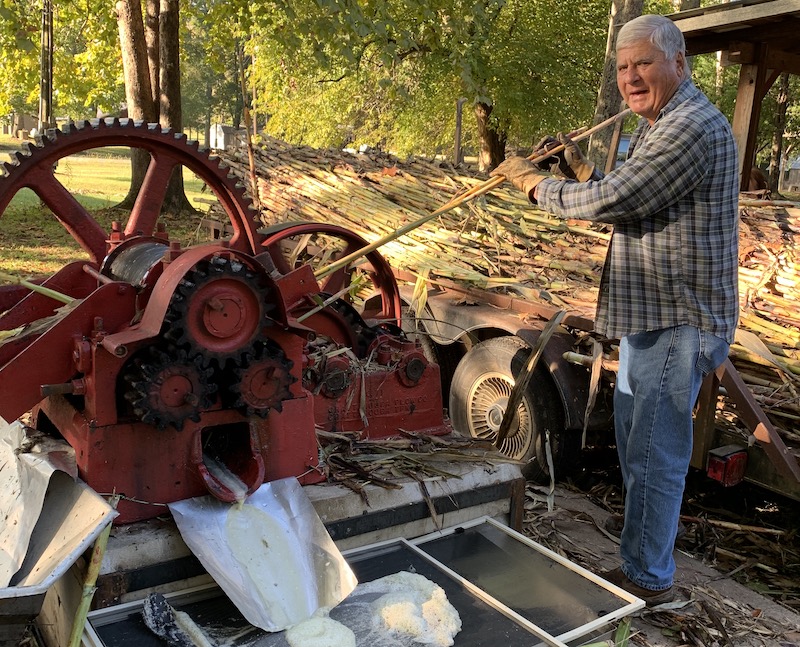 Glen Smith pushes each stalk of sorghum through the juice extractor so that it can be made into sorghum syrup. (Contributed)

The folks of South Shelby County have been attending the Fall Festival at the Shelby Iron Works for years. Vendors, food, music and a little local history have all been great attractions that the local community has always looked forward to each autumn.

The festival had to be canceled, like so many other things this year, for safety purposes, but that didn’t stop the volunteers of the Shelby Iron Works from making sure one long-held tradition was carried out despite the pandemic—the making of sorghum syrup.

Since 1989, every spring, a group of men local to the area have been planting sorghum on a local plot of land dedicated to the purpose of keeping the old-time tradition of making sorghum syrup alive. Jerry Davis loans an acre and a half of his land every year and that in conjunction with a backup plot of half an acre down at the Auburn extension.

Then each fall, men like Glen Smith, John Perkins, Frank Hebert and Tom Calee then take on the task of turning that sorghum into syrup. In more recent years the task of syrup making has been the center of the Shelby Iron Works Fall Festival, and while the festival did not happen this year, the sorghum did.

The sorghum crew showed up last week and turned cane to syrup. The entire process surprisingly took just hours when all the volunteers worked together, and the work was done on site at the Iron works in the old-fashioned syrup mill where locals could come and learn about how it was done in the good old days.

During the Great Depression and World War 2 when supplies were hard to come by or rationed, sorghum syrup became a pantry staple that was easier to come by than refined white sugar was because it could be cultivated and processed locally. Eventually, as society became less self-sufficient in the way of homesteading, and sugar and other items became more readily available through the convenience of supermarkets, traditions like making sorghum syrup began to fall to the few who worked to keep the practice alive.

The sorghum rendered each year is bottled and sold by the Shelby County Historical Society and can be bought at the Shelby Museum and Archives in Columbiana, or at the monthly pancake breakfast at the historical Shelby Iron Works on the first Saturday of each month.

The Shelby County Historical Society is doing great work to preserve and make available to the public, history both great and small, of our great county. The volunteers that take on this venture each year are part of that history and have great stories to tell when you show up to learn about what they are doing. But it won’t be too long before this practice is lost if a few folks from the next generation don’t come alongside them to learn how to carry it on.

To get involved in this and other great activities that help keep traditions like this alive, you can join the Shelby County Historical Society. Visit Shelbycountyhistory.com to learn about membership, or to follow the society’s blog.