Briarwood’s season ends with loss to No. 5 Mountain Brook 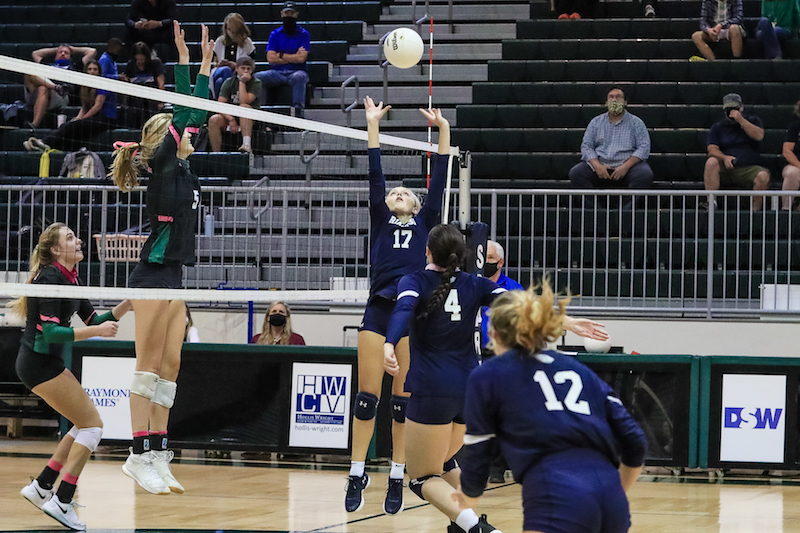 The Briarwood Lions fell to No. 5 Mountain Brook in the first round of the area tournament on Oct. 13 to see their season come to an end. (For the Reporter/Dawn Harrison)

MOUNTAIN BROOK – The Briarwood Christian Lions were up against incredible odds and gave it their best, but couldn’t unseat the host and No. 1 seeded Mountain Brook Spartans in the first round of the area tournament on Tuesday, Oct 13.

Briarwood had a great start to the match, playing well and taking advantage of errors from Mountain Brook. Stella Helms was everywhere on the court and served well as Briarwood put the Spartans on their heels.

Vaeda Burkhead was also effective in the middle making several kills and an ace as the Lions took a quick 10-4 lead.

Mountain Brook, however, powered back slowly and took the lead in the middle of the set. Briarwood remained close and was within 19-17 before the Spartans finally took control.

The Spartans were all business in the second set as they overwhelmed the Lions at the net after being down 4-0.

Greer Golden and the front line were dominant and proved the biggest mismatch of the game. The service from the Spartans’ side was crisp as well, hindering Briarwood’s ability to attack on offense.

Emma Crawford was the bright spot for the Lions in the period as she recorded four of her seven kills in that span. But Mountain Brook used runs of 10-3 and 6-2 to put the set away.

Briarwood continued to show a lot of heart in their final set of the season. Down 5-0, the Lions clawed back to tie the game 6-6 and fought to keep the set close, but the Spartans eventually pulled away as they had in the previous sets to close out the victory.

Ansley Greer led the team with four kills in the waning moments, but in the end, despite the fight BCS showed, the size and strength of the Spartan offense was too much.