Montevallo holds off Holt in crucial contest for playoff hopes 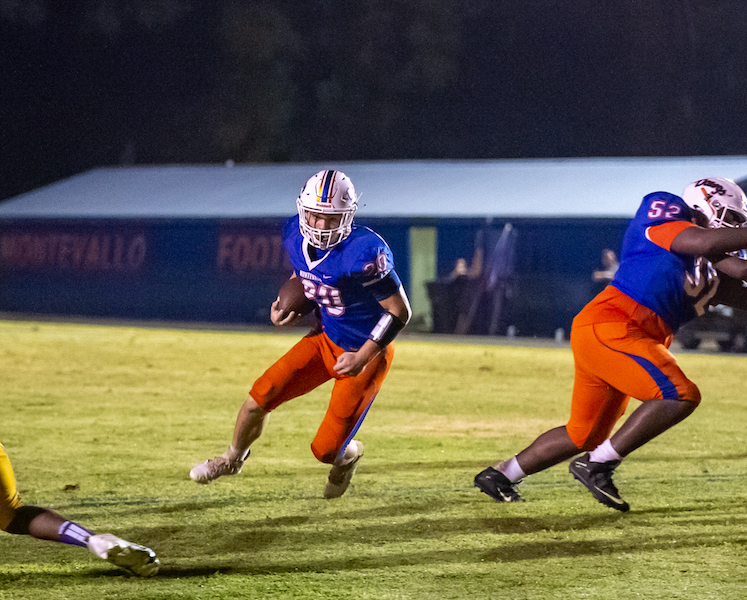 Joseph Anderson, above, had a strong night for Montevallo on the ground with three touchdowns to lift the Bulldogs to a big 40-33 road win against Holt. (File)

HOLT – The playoff dream inches closer for first year head coach Blake Boren and the Montevallo Bulldogs after they held on for a 40-33 win on the road at Holt Friday night, Oct. 16.

“Tonight, we were very fortunate. Very proud of our kids. We’ve got six or seven in [COVID-19] protocol, we lost one in the pregame,” Boren said. “We started two freshman receivers that had not played a down of football all year. I’m just really proud of our kids that we were able to pull this one off.”

The Bulldogs scored twice in the first quarter to start with a 14-6 lead, however, they stalled out on a drive late in the quarter on the Holt 34-yard line. It only took the Ironmen two plays to score from there, as a massive run brought Holt within two points.

From there, Montevallo stopped just short of the red zone and gave the ball back to Holt for a second straight drive. The Bulldogs’ defense struck back on the ensuing drive, with a second interception. This time it was a pick-6 that put Montevallo up 20-14 at the half.

Holt’s dynamic big-play offense came out swinging in the second half, however, launching a 74-yard pass on just the second play of the drive. The punch-in run on the next play made it a one-point game just one minute into the second half.

That started a back-and-forth second half of football, but the Bulldogs had the benefit of playing from in front.

Montevallo’s run game was the story of the second half, with much of the offensive yardage coming from junior running back Joseph Anderson.

Three of the Bulldogs’ four second half drives ended in trips to the end zone, and all three were on the legs of Anderson. Junior receiver Kial Cottingham was also active on the receiving side.

“The run game was what saved us,” Boren said. “I thought Kial Cottingham did a really nice job at receiver and played tremendous, but yeah, it was a football game where we were going to have to run the football, and so Joseph Anderson’s done what he’s done all year. Our offensive line’s done what they’ve done all year, and again, an offensive line that’s been a bit of a patchwork offensive line because we’re missing one of our senior leaders who’s out.”

Holt bounced between productive and disappointing drives in the second half. A Jordan Driver rushing touchdown on a fourth down midway through the third brought the Ironmen back within one.

But Holt’s next two drives ended with back-to-back punts, one of which came after a Montevallo interception, and the other one being inadvertently blocked by a Holt blocker.

That set up Montevallo on the 18-yard line and led to Anderson’s third score.

Now down 40-26 with 2:42 remaining, Holt exploded with two big plays on offense, the second of which found Melvin Rollins in the end zone for a 31-yard score. But the ensuing onside kick was recovered by Montevallo to seal the 40-33 win.

Anderson finished the game with 44 carries for 273 yards and five touchdowns in the win. The Bulldogs’ defense also had a big night, forcing three turnovers, including the pick-6 and two fumble recoveries.

The 4-4 Bulldogs wrap up their 2020 region slate at home against Dallas County next Friday, with a win guaranteeing them the three-seed in Class 4A, Region 3. They’ll also make the playoffs regardless of the outcome next week as long as West Blocton loses to No. 1 American Christian.