Thompson, Hoover set for top-2 battle with region title on the line 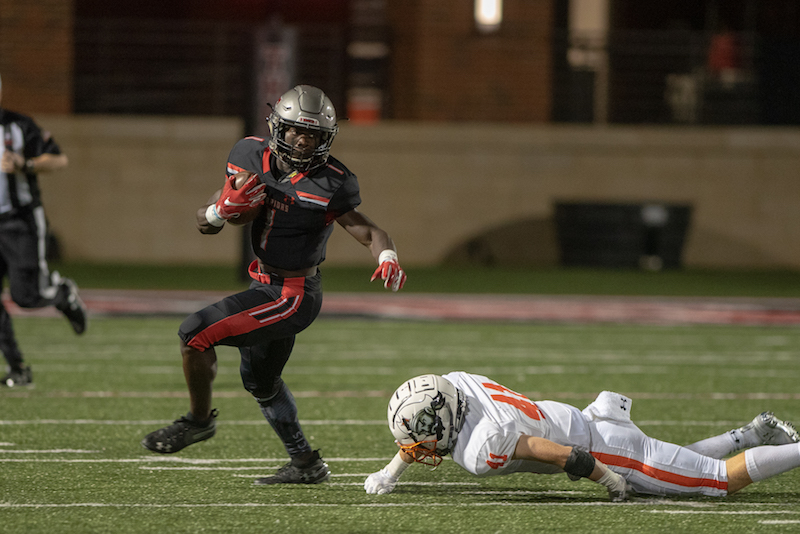 The Thompson Warriors and Hoover Buccaneers will battle in another battle of top-five teams with the Class 7A, Region 3 Championship on the line this Friday. (File)

It is still hard to believe that three years ago, Thompson had never beaten the Hoover in school history with a 0-21 record against the Buccaneers all-time.

But times change. Since entering the 2017 football season, the Warriors have won four of the last five matchups between the two teams, including the last three in a row, all with plenty on the line.

Each of the last three seasons, the two teams have met twice a year with each game either deciding the region champion or taking place in the semifinals.

And with the Warriors winning last year’s region title, they’ll be motivated to repeat, but Hoover has lost three in a row in the series, including two semifinal matchups that have led to the Warriors playing for the last two state championships instead of the powerhouse Bucs.

This will also mark the seventh consecutive with both teams inside the top five of the rankings as Thompson enters No. 1 and Hoover No. 2.

Heading into this year’s top two battle, Thompson has looked the part as the defending state champs on a path to repeat, but the Bucs haven’t looked far off the Warriors pace as both enter with strong track records sitting at 9-0 this season.

Thompson’s offense has been led by junior quarterback Conner Harrell as well as standout athletes such as Ryan Peppins, Sam Reynolds, J.B. Mitchell, Tre Roberson and others.

It’s an offense that has scored 31 or more in every game, 48 or more in five games and is averaging 43.7 points per game.

The biggest problem when preparing for Thompson’s offense is that at the high school level, it’s difficult to have enough standout defenders to spread the field and handle the speed and physicality of four future Division I receivers.

On top of that, if Jarrett Crockett is healthy enough to play at running back, which he was last week against Oak Mountain, then the Warriors have one of the best run games in the state.

But the offense hasn’t faced much adversity this season, which could finally come this week against a Hoover defense that is only giving up 16.9 points per game.

It’s a unit that has given up seven or less in four games this season with two shutouts.

That said, against the best offenses they’ve seen, they gave up 35 to Central-Phenix City, 28 to Hewitt-Trussville and 34 to Spain Park.

Thompson’s offense is better than all three, as long as the Warriors don’t make mental mistakes such as penalties and turnovers.

Hoover’s main goal defensively should be to get after the ball and create as many turnovers as possible, while also trying to get the Warriors off-kilter, which could lead to other mistakes. To do any of that, the Bucs will have to get pressure on Harrell.

If the Warriors fall behind and somehow don’t play the same offensively as they have the rest of the season, that looks to be Hoover’s best chance to win.

The Bucs also have the offense to take advantage if that does happen.

So far this season, Hoover has averaged 39.4 points per game and has scored 38 or more points in five games.

Quarterback Josh Lundy has been on a roll the last few weeks, topping 300 yards passing on multiple occasions with several touchdowns, while the Bucs also have a plethora of running backs that can threaten 100 yards.

But the biggest difference in the game could be Thompson’s defense.

A unit that came into the season expecting to be the best in the state, the Warriors have been inconsistent on that side of the ball against some of the better teams.

The Warriors gave up 34 to Oxford, 35 to Spain Park and 21 to Hewitt-Trussville and Oak Mountain. But they have also shut down several opponents, holding five teams to nine points or less, including two recent shutouts.

With playmakers like Jeremiah Alexander and Tony Mitchell, two of the top recruits in the country, as well as others like Triston Woody, Jax Van Zandt, Greg Green and Gavin Shipman, it’s a unit that is only giving up 14.9 points per game and is the best it has been in years.

Starting with the Hewitt game, the Warriors have looked completely different on that side of the ball, and are coming off a game against Oak Mountain where they had two scoop-and-score touchdowns. As long as they’re getting off the field on third down, it’s tough to see them losing this game with the talent on the other side of the ball.

Quite simply, the Warriors have been dominant and it’s tough to see them being stopped enough on offense in this matchup because, well, it just hasn’t happened this year. Pair that with their defense, and Thompson should have a strong chance to repeat as region champs.