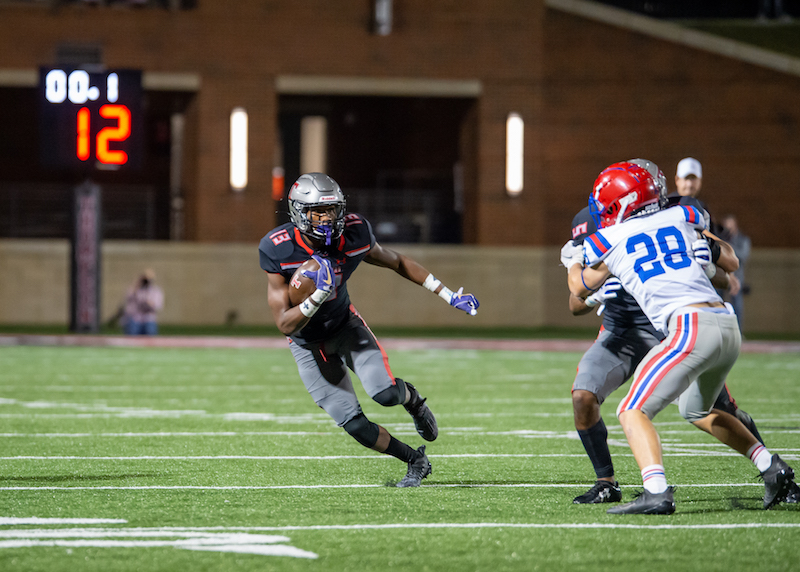 Thompson receiver J.B. Mitchell will represent the Warriors in the Alabama-Mississippi All-Star game after recently being announced to the Alabama team. (File)

Three of Shelby County’s best senior football players will get the opportunity to compete in one of the state’s most storied traditions by earning a spot on the 2020 Alabama All-Star football team.

That made those three standout athletes three of 40 best seniors in the state this season at their position with more than 400 seniors from across the state nominated to play in the game.

“I am very thankful for the committee and all the hard work they put in,” said Jamie Lee, Director of the Alabama High School Athletic Directors and Coaches Association of the selection process. “I could tell they were prepared and had done their diligence to pick a quality team under the “restrictions” that are placed on them, which include making sure each classification and district in the AHSAA are represented.

“We also thank our schools for their support of this annual game. We had over 400 seniors nominated to play in this game.  Selecting a team of 40 from this impressive list was a daunting task indeed, but the committee members were diligent and have done a great job.”

Mitchell has been one of the state’s best receivers this year regardless of classification. The senior receiver for Thompson has helped lead the Warriors to a 9-0 record so far with sights set on repeating as state champions.

He already has 883 yards receiving and seven touchdown receptions with two regular season games and the postseason still left to play. Mitchell has 70 or more receiving yards in all but two games and has topped 140 yards three different times with at least one touchdown in five games this season.

Seaburn Hines will represent the Helena Huskies at the game thanks to his dominant presence on the offensive line. Highly regarded by his own head coach Richie Busby, as well as other coaches, Hines is a tough, physical body in the trenches who loves his position.

He’s a big reason Marquis Johnson and Kobe Hughes have been able to have such good seasons at the running back position the last two years for an offense that loves to run the ball. And he’s also the leader of the position who has helped several young players get ready for this season.

Right now, the Huskies are 5-4 and heading to the playoffs, with Hines and other seniors on the team hoping to create some magic in the coming weeks.

Tabor has been one of the best kickers in the state this season and recently announced that he would continue playing football collegiately at the University of St. Thomas in Minnesota.

His best game came in the opener against Huntsville when he made his 43-yard field goal and went 7-for-7 on extra points, but he’s remained consistent throughout the season.

All three players will represent their school, Shelby County and the state when they take part in the game this December, which is going to be held at the Cramton Bowl in Montgomery.

Alabama lost to Mississippi 17-16 in overtime last year at Hattiesburg but still holds a 22-11 edge in the series heading into this year’s game.