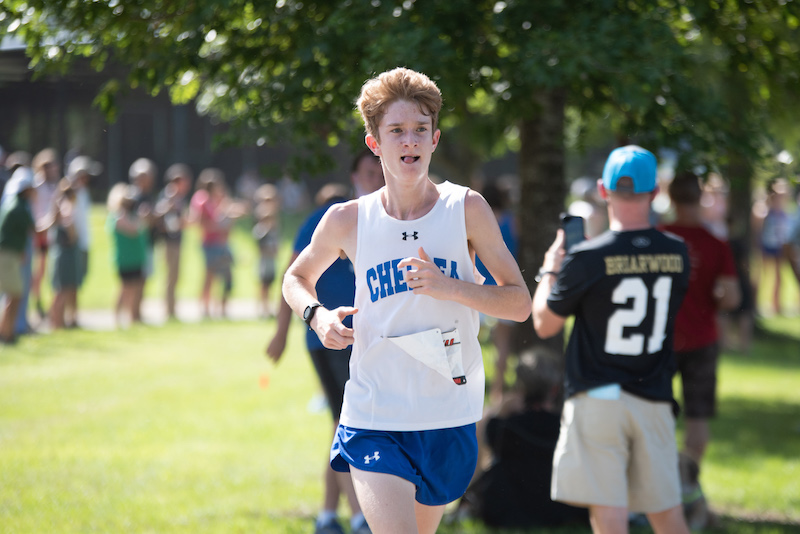 MADISON – The Chelsea Hornets’ cross country teams traveled up to Madison on Saturday, Oct. 17, to compete in the James Clemens Last Chance Twilight Meet, which was held under the lights in primetime.

As the regular season nears a close in the coming weeks, it marked another event for Chelsea’s cross country runners to gain some confidence, and junior Miles Brush took advantage for the boys, while sophomore Cady McPhail did so for the girls.

Brush continued what has been a spectacular season by finishing first in the event with a time of 15:35.09. It marked Brush’s second first-place finish this season and his third fastest 5,000-meter run time.

Most impressive about Brush’s season to this point is his consistency. The Chelsea runner has finished every race between 15:17.91 and 15:45.04, running every race in less than 16 minutes. He’s also finished inside the top seven in every event this year and has two fifth place finishes.

His first place finishes came in the Warrior 2 Mile Invitational and in this event.

Behind that, seven other runners finished inside the top 90 of the 134-person field.

The final two finishers were Bay Brush and Camden Thomas, who finished 88th and 89th, respectively, with Brush running the race in 18:05.94 and Thomas finishing in 18:10.

As a team, the Hornets finished eight with 199 points.

For the girls, McPhail was slightly off her personal record pace, but ran her second fastest time of the season to finish second with a tie of 18:26.72.

McPhail has now finished inside the top 10 in five of six events this season, finishing 11th in the other event. She has also finished every race in less than 20 minutes and has run three races in less than 19 minutes.

In addition to McPhail, Claire Neuberger and Avery Thompson both finished inside the top 50 with Neuberger taking home 39th and Thompson claiming 42nd. Neuberger ran the event in 21:03.12, while Thompson finished with a time of 21:06.55.

The Hornets finished seventh overall in the team standings.